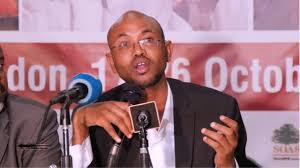 Somaliland’s renowned poet Hasan Dahir Weedhsame has alleged that he was subjected to constant intimidation and snooping since the incumbent president Musa Bihi assumed office.

This came two days after the government cancelled his poetry reading event planned to occur in the port city of Berbera.

In a press conference in Hargeisa today Weedhsame said that it was the first time he was stopped from reciting poetry by the government.

As promised yesterday Weedhsame detailed how the poetry reading event was suspended.

According to him the Criminal Investigation Department agents apprised the management of the venue the cancellation of the event prior two hours before the kick off.

The agents referred the management to the city authorities for the reason behind the cancellation.

The city officials on their part said the order came from Hargeisa to put off the event.

The poet said that the suspension was not an isolated incident but the culmination of sustained campaign of intimidation and harassment to silence him.

The poet has alleged that he was called for disciplinary questioning because of Facebook post that was critical to the government.

Weedhsame, the poet held President Musa Bihi liable for the intimidation and harassment that he had gone through for the past couple of years.

He claimed that president Bihi is happy about his unfair treatment.

Finally, the poet announced that he will not stop writing and reading poetry and speaking the truth.