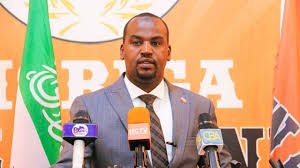 The interior secretary of Wadani party, Mohamed Farah has lauded the peace agreement initiated by the government in El Afweyn district of Somaliland.

He said that his political party strongly welcomes the peace accord and called on the residents of the district to keep their unity and security. He also pledged to the government to have a clear plan to sustain disagreement and to avoid recurring clan conflicts in the region.

He said: ” Wadani party, we stand for solidarity, unity and peace in Somaliland. We strongly support any kind of peace agreement in El Afwey district. We are calling on the government that this clan fighting should not erupt again in the region.”

Mr Mohamed Farah underlined that to keep the unity and security of the country is the responsibility of the president and his interior minister.

He also pointed out his political party has played a role to attain a peace agreement in El Afweyn.

For the last ten years, there have been clan fights in El Afweyn district in Sanaag province.

These clashes caused loss of lives and properties.

Somaliland government with clan elders tried many times to secure a peace agreement in the district but later failed to sustain it.