The court has also fined him to pay 3 million Somaliland Shillings.

This was disclosed by Horn Cable Television Director, Mohamed Illig in a statement that he posted on the facebook.

The case alleged against the Editor-In-Chief has been going on at Hargeisa provincial court since November and the editor has been under police custody but the court has issued the verdict today.

The Editor-In-Chief has been in detention for over 22 days and has been battling with ailments. He was taken to hospital to cope with hypertension and cardiac problems.

The Director of Horn Cable Television has posted a picture taken while with the three kids of the editor-in-chief who was convicted by the court and said that his children were hoping that their father could have a fair trial. 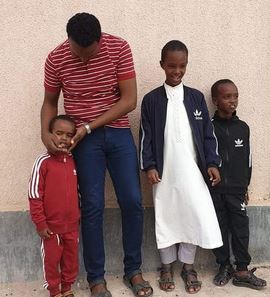 Mr. Illig has expressed his disappointment and deplores the unfair conviction of their colleague by the court.

Media and Human Rights Associations have condemned the illegal detention and the conviction of the Editor-In-Chief.

The current Musa Bihi administration has come under for lack of respect for freedom of speech and the press in Somaliland. His leadership has targeted opposition officials and media outlets that are very outspoken to his government and does not have the tolerance.