The Ministry of agriculture has announced on Wednesday that it will purchase local staple food from the farmers across the country. The agriculture minister, Honorable Ahmed Mumin Seed has reiterated that it is the right time to implement a pledge made by Somaliland Head of State that the government will buy local products from the farming communities. Seed said: “The president promised to buy local food from the farmers. The food purchase was due to begin but the finance minister is out of the country. We will start to purchase the crop harvest in last spring from the farming community. The budget allocated for the project is now available. The minister has asserted that the purchase is aimed at motivating farmers and boost crop production across the country. On the other hand, the ministry of agriculture has handed over 2800 sacks to the chairman of SL Food Reserve agency including maize, sorghum, and wheat harvested from Wajale plains that the ministry of agri oversees. The handing over ceremony was held at Wajale plains where the crops were harvested. 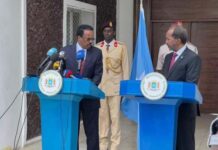 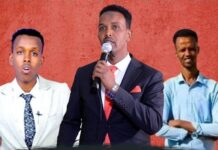