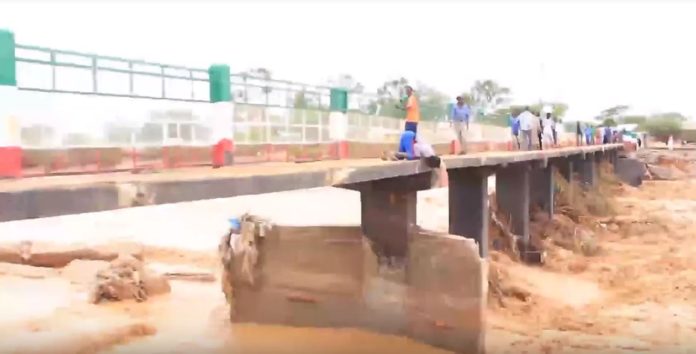 Burao—Rushing water  and debris caused a walking bridge in Burao wretchedly damaged on Sunday according to reports. The bridge was recently constructed and revamped by the local government and was launched in April this year. The bridge is located just stone’s throw away from Togder central Bank in Burao and crosses the main river of the township linking the villages of the provincial capital. According to poorly shot video indicate that the wall as well the handrails of the bridge have been terribly damaged by the floods. Parts of the foundation of the bridge also got damaged in the rushing water. There are reports which confirm that the running water reached up to six meters as high as possible. It is reported that two other bridges also damaged in the aftermath of the floods. There are no casualties reported as far as the floods are concerned. Regional authorities including Burao mayor flanked by chief regional police officers toured the site to asses the extent of the damage. Police are reported to have blocked also people were stopped to use the bridges for their safety.