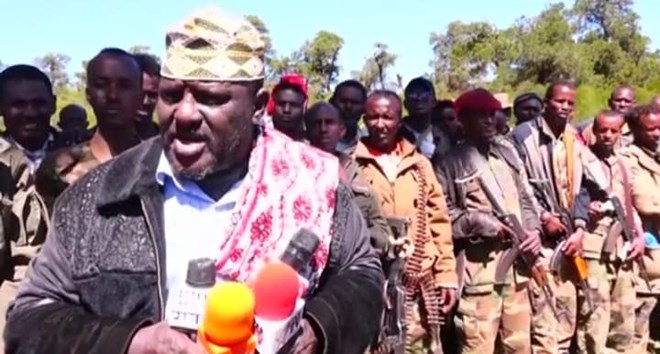 ERIGAVO–Somaliland rebel group, Justice and Equality Movement has on Thursday officially handed over the rebel soldiers to mediation elders in a ceremony held in the outskirts of Erigavo, the capital of Sanaag’s restive region.

The soldiers will be reunited with Somaliland national army as this brings two year insurgency between the rebel group led by Colonel Said Jama Arre and Somaliland government confrontations.

“It is a historic day today. I salute the traditional elders and Members of the Parliament who are sitting in front of me. Today I formally hand over the rebel soldiers of Justice and Equality Movement along with their Commanders, officers and intellectuals. I call upon that the officers must be allowed to reach their destiny.” Said Colonel Said Arre. 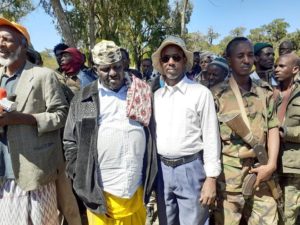 The deserted Colonel Arre, a former member of Somaliland Defense Forces has conveyed a message to President Bihi and the Army Chief, Brigadier Nuh Tani.

“I urge army Chief, Nuh Tani to uphold the justice and I tell the country’s leader that clan won’t be useful as his elders rejected him to continue his armed insurgency.” Said Arre

Mr. Arre has told that he is handing over 900 infantry soldiers along with 100 armored vehicles.

Mr. Arre was refused to be granted pardon by President Bihi and as per the peace deal; he will go into exile and request the pardon from Somaliland president Bihi.

This has ended a two year insurgency between the rebels and Somaliland government as peace is about to return to Sanaga’s restive province.