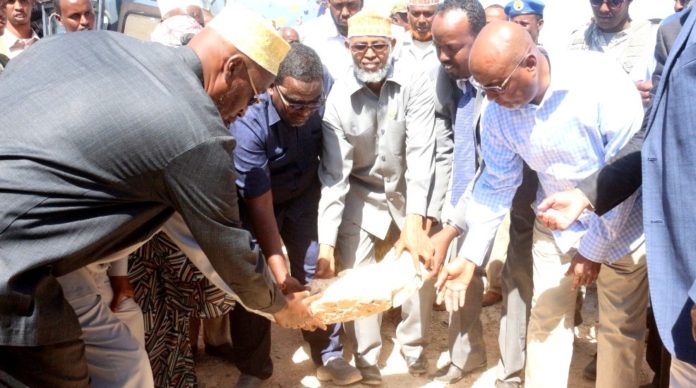 Minister of Transport and Road Development in Somaliland Abdullahi Abokor Osman, presided over the ground-breaking ceremony for the road connecting between the towns of Wadaama-goo, and Buhodle named the peace highway shall link Saraar, Togdheer and Buhodle regions.

Among those attending the ceremony were cabinet ministers, local administration officials from Wadaamo-goo, Qorilugud, Buhodle and Saraar regions affirmed the importance of road construction for the local community and the wider Somaliland community, as it is a major road linking three regions of eastern Somaliland.

Mr. Hassan Matan, the chairperson of the road construction committee said that the road should promote peace and development in Saraar and Buhodle regions; he further promised his commitment in supporting the completion of the road.

The managing director of Somaliland development agency, speaking at the event, pledged to help build the peace corridor linking the three eastern regions in Somaliland that will be used by vehicles transporting commuters and goods between Somaliland, Somalia and Ethiopia and which will pave way for development in those regions.

Mr. Mohamed Kahin Ahmed, Minister of Home Affairs Speaking on the occasion, said that the road will be a complimentary road and will play a significant role in the development and security of Somaliland, particularly in the areas and regions in which it links.

Mr. Hassan Mohamed Ali “Gaafaadhi” minister of national planning and rural development said that the people living abroad and in those areas should contribute money for the construction of the road.

Mr. Jama Mahmoud Egal, minister of energy and mineral resources said, “There is no room for empty talk since the construction work for the vital road linking Wadamo-goo and Qori-Lugud and areas bordering Ethiopia has already begun in earnest.

Mr. Abdullahi Abokor Osman, minister of transport and Road Development speaking at the groundbreaking ceremony linking the Saraar, Togdheer and Buhodle regions dubbed the peace highway thanked all of those who contributed towards the construction of the road. The Transport minister reiterated that the government of Somaliland is committed to completing the road construction works that are part of the ruling “KULMIYE” party campaign pledges made during the 2017 presidential elections.