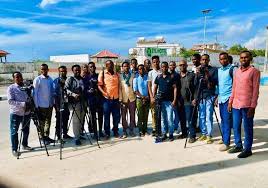 MOGADISHU–Attacks against members of the press in Somalia continued in 2019, the head of an independent journalists’ trade union said Friday.

“At least 81 journalists were physically assaulted last year while on duty, while the authorities arrested 50 others,” Abdalle Ahmed Moumin, secretary general of the Somali Journalists Syndicate (SJS), told Anadolu Agency.

According to a statement by SJS, 18 journalists were arrested in Somaliland while authorities in northeastern Puntland state arrested five.

“Police in Puntland have been extremely aggressive against the media and carried out four raids on independent media houses for publishing investigative reports deemed critical of the state,” it added.

While the number of journalists killed in Somalia was considerably less than the previous year, the level of arbitrary arrests, attacks and suspensions remained steady.

Local and federal authorities continued to enjoy impunity and used their power to suppress Somali journalists, the statement added.

Six media houses were closed in total, including five broadcasters and one newspaper, according to SJS.

Two journalists were killed in 2019, one of them Somali-Canadian Hodan Nalayeh in the port city of Kismayo after al-Shabaab attacked a hotel there.

Three journalists were injured last year, with two of them suffering gunshot wounds.