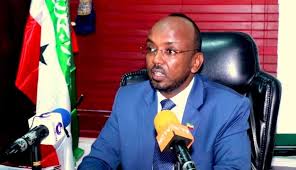 The Chairman of Somaliland’s Civil Service Commission has denied that a government employee was dismissed through text message.

Farhan Aden Haibe said in a statement on Facebook that text messages are never used as a communication channel for personal matters.

This comes after widespread outreach of alleged dismissal of an employee at the ministry of livestock and fishery via text message.

The controversy started with Hana Warsame Sulub, a civil servant of the ministry of livestock and fishery posting a screen shot of text message she had received purportedly from the Civil Service Agency.

The text message read: Hani Warsame Sulub, this is the civil service agency informing you that your transgression warrants your dismissal from the job.

The chair of civil service agency, Farhan, has responded on facebook denying that the civil servant was fired via the text message.

However, Hani Warsame insisted on her claim saying the text message was sent by Abdikani Suleiman Jama, the director of the legal department of the agency.

Hani Warsame’s father revealed that she was asked by the civil service agency to apologize to the minister of labor and social affairs, Hinda Jama Qani, whom she had criticized.