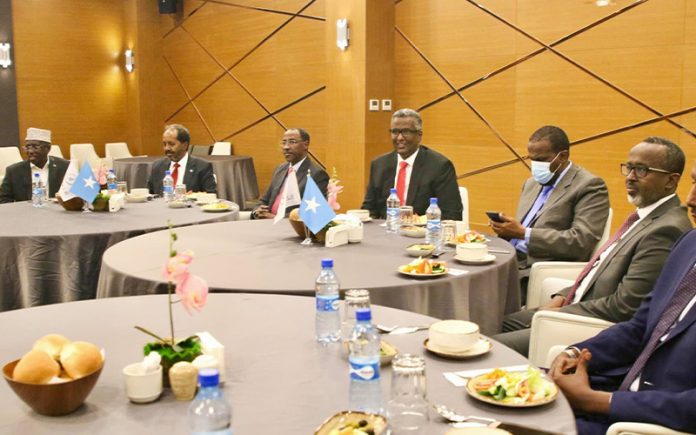 Somalia’s opposition on Monday called on military, police and intelligence top brass allied with the incumbent President Mohamed Abdullahi Farmajo to stay out of politics, weeks after armed forces commanders had promised that they would do so.

In a press statement, the Council of Presidential Candidates, a conglomerate of opposition parties said it was “warning armed forces commanders backed by the term-ended president to stay out of political affairs”.

Opposition leaders also welcomed Sunday’s cabinet decision to reverse the designation of Ogaden National Liberation Front (ONLF) as a terrorist group and announcement that the 2017 rendition of one of its commanders Abdikarim Muse Qalbidhagah to Ethiopia was a major violation.

As tensions simmer in the central region of Hiran over an anticipated visit by Hirshabelle regional president Ali Gudlawe, which has been opposed by the residents of the town of Baladwayne since his election in November 2020, the opposition called for dialogue to end the crisis.

“Grievances by Hiran region need a political solution and should not be compromised for election campaign,” the Council of Presidential Candidates said. “The Council encourages Prime Minister Roble to independently manage, coordinate and accelerate the election.”