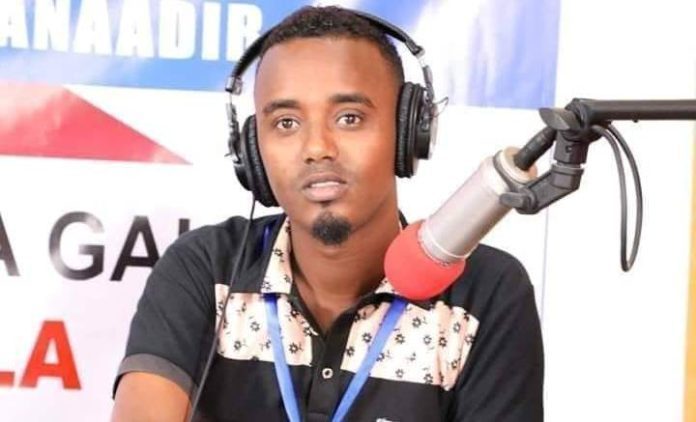 Journalist Abdullahi Osman Adani (pictured) who was briefly arrested today on Tuesday 23 July, 2019 alongside other journalist before they were released. |

Officers from Criminal Investigations Department (CID) arrested journalist Abdullahi Osman Adani, who also freelances for other online media, from the headquarters of Radio Shabelle in Mogadishu around 12pm local time. Adani was accused to have contributed to an online article which alleged corruption within the police, especially CID detention cells.

An hour after the arrest of journalist Abdullahi Osman Adani, journalist Hassan Wali Abukar was briefly detained after he visited the CID to see his colleague journalist Adani.

Both journalists were later freed without charges.

“I was released shortly after I was arrested at the CID headquarters but my colleague Abdullahi Osman Adani remained in the detention for six hours. He is now also released,” journalist Hassan Wali Abukar told Somali Journalists Syndicate (SJS).

Somali Journalists Syndicate (SJS) is relieved to learn that both journalists were released as the union condemns the arbitrary arrests by the Somali police aimed to curtail the media independence and the journalists’ aptitude to report freely.

”We are relieved to learn that our colleagues were finally freed after several hours of illegal detention and condemn the violations against their rights including the arbitrary arrest.”Abdalle Ahmed Mumin, Secretary General of the Somali Journalists Syndicate (SJS) said, “We call for the Somali police to uphold the press freedom and stop all sorts of intimidation and harassment against the journalists specially those who dare to report police misbehavior.”

“Journalists should be praised for braving to report and expose matters that are of public interest and should not be intimidated with arrests,” Mr. Mumin added.

In the past months, members of the Somali security forces employed aggressive measuresincluding arrests, intimidations and physical assaults against independent journalists.