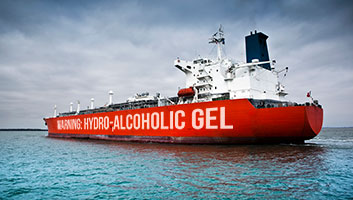 Somali pirates have attacked a tanker carrying two million barrels of the most valuable cargo in the world today, hand sanitiser.

In the early hours of this morning, a tanker loaded with three hundred million litres of hydro-alcoholic gel with a street value of six billion pounds was taken hostage while on route to the UK, with the pirates allegedly demanding fifty million pounds and fifty thousand toilet rolls as ransom.

“We have no choice but to pay,” said a government spokesperson who is trying to negotiate with pirates off the coast of Somalia where the tanker was seized.

“The nation is desperate for the tanker to arrive in the UK, the entire country is on the verge of anarchy without adequate access to hand sanitiser, and this hijacked vessel could put us back weeks if we can’t resolve it quickly.

“The money isn’t a problem, we could wire that amount of cash to them this afternoon, but we simply don’t know where to get our hands of fifty thousand toilet rolls. Do you?

“Christ, I think we’d struggle to round up fifty at this point. Do you think they’d accept old copies of the Daily Mail as an arse-wiping alternative?”

t is expected that the SAS will be sent in under the cover of darkness to recover the precious cargo, and that Tom Hanks will be playing a starring role in the Hollywood adaptation by mid-2025.