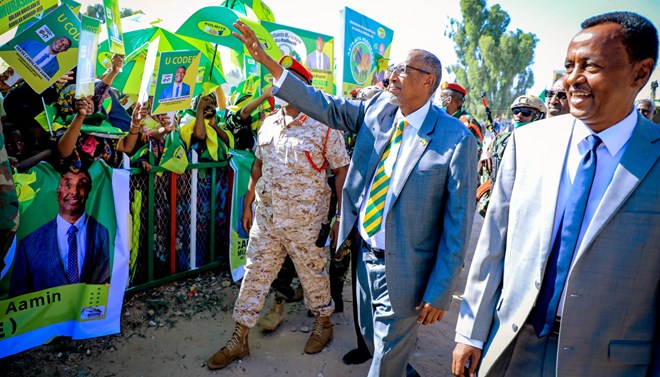 Somaliland election campaign for local council & parliament is in full swing. The ruling Kulmiye party is campaigning on its first day. The president of Somaliland has attended the rallies in Hargeisa. Supporters of Kulmiye party came out in droves and held rallies in support with their favorite candidates across the nation. The president of the republic of Somaliland who is also the chair of Kulmiye party participated the rallies held in the capital Hargeisa freedom park. He felicitated the public the start of election campaigns and showed optimism that the party’s candidates will be in the top list for the election winners and encouraged eligible voters to vote for Kulmiye candidates. Bihi said: ” We have chosen the most competent candidates. We entrusted with power and are ready to serve the nation. None will lose the election. They will all be victorious. The president reiterated that this election will send a clear message to SL foes. The Head of State did not name any country.” In response to the accusations from the opposition parties, the Head of State responded. Bihi said: ” SL political parties are competing with each other. Kulmiye party has been put to test and vetted.” Two political parties ruled Somaliland ever since SL’s inception. The first ruling party was founded by the later SL leader, Mohmed Haji Ibrahim Egal. The current Kulmiye party was founded by Ahmed Mohmed M. Silanyo who was the third president of the republic. He founded the party together with other figures who maintain the positive impact.