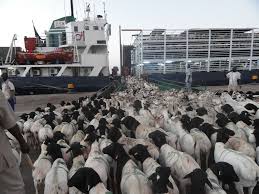 The cargo ship that was stranded for couple of days at Jeddah port in Saudi Arabia has on Thursday started to unload after Saudi vets have checked the well being of the livestock. This was confirmed by Somaliland’s Chair of Chamber of Commerce, Jama Aidid Ibrahim. The chair has expressed thanks to the Almighty Allah for unloading the livestock from the cargo which belonging to Somaliland livestock traders. Mr. Jamal has said that this is a huge triumph for Somaliland. The chair has also confirmed that more than 500 of the estimated 20, 000 died during days that the ship was stuck in the port due to controversy over the issuance of medical certifications. Two cargo ships are expected to depart from Berbera port which will carry an estimated 61, 000 and 13, 000 livestock and will directly dock at Jeddah port, Saudi Arabia. The Saudi authority acknowledged that Somalia’s Federal Gov has no jurisdiction over Somaliland and certificates issued by the Federal Gov could be forged. Finally, Saudi Arabia has accepted medical certifications issued by Somaliland ministry of livestock which is a huge victory over Villa Somalia which tried to block livestock trade between Saudi Arabia and Somaliland.