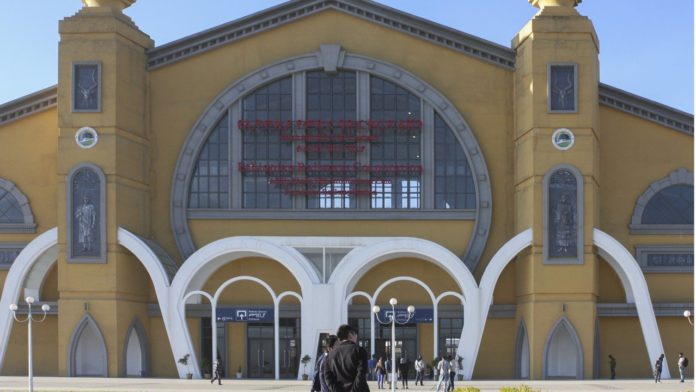 When Chinese conformity came up against khat and a colourful cast of Horn of Africa passengers, flexibility was key

In the middle of the departure hall stands a sign. On it is an arrow pointing to the right – “Domestic” – and one pointing to the left – “Cross-border”. Djibouti-bound passengers turn left.

Since January, the new Addis Ababa to Djibouti City railway line has been carrying passengers between the Ethiopian capital and the coastal capital of its diminutive but strategically important neighbour. The 728km line is a joint venture involving the governments of the two countries and China, which built and largely financed the US$4 billion endeavour.

That explains why, when approaching the Furi-Lebu railway station on Addis Ababa’s outskirts, one could be forgiven for thinking an Oriental palace has been mis­placed in the Horn of Africa. The Chinese are operating the line for six years before handing over to the Ethiopia Djibouti Railway (EDR) company, which is why a Chinese conductor is overseeing Ethiopian platform guards in smart red waistcoats and hats as they guide passengers onto the 08:00 to Djibouti City.

The guards are positioned at regular intervals along the platform edge as the train pulls slowly away. Standing facing the carriages with arms by their sides, they look ill-at-ease with Chinese protocol.

Within five minutes, the scruffy outskirts of Addis Ababa have been replaced by village huts, cattle ambling beside the track and fields stretching to hills silhouetted in the distance. In contrast to the expansive view, the atmosphere inside the half-empty carriage feels strained, dull even. The only voice to be heard is that coming from the speaker system: “Do not take shoes off, lie down on the seats, raise your voice or spit in the carriage; remember to put soft paper in the bin in case it blocks the toilet, don’t forget to flush and turn taps off after washing hands; please keep the tidiness – it is everyone’s responsibility.” 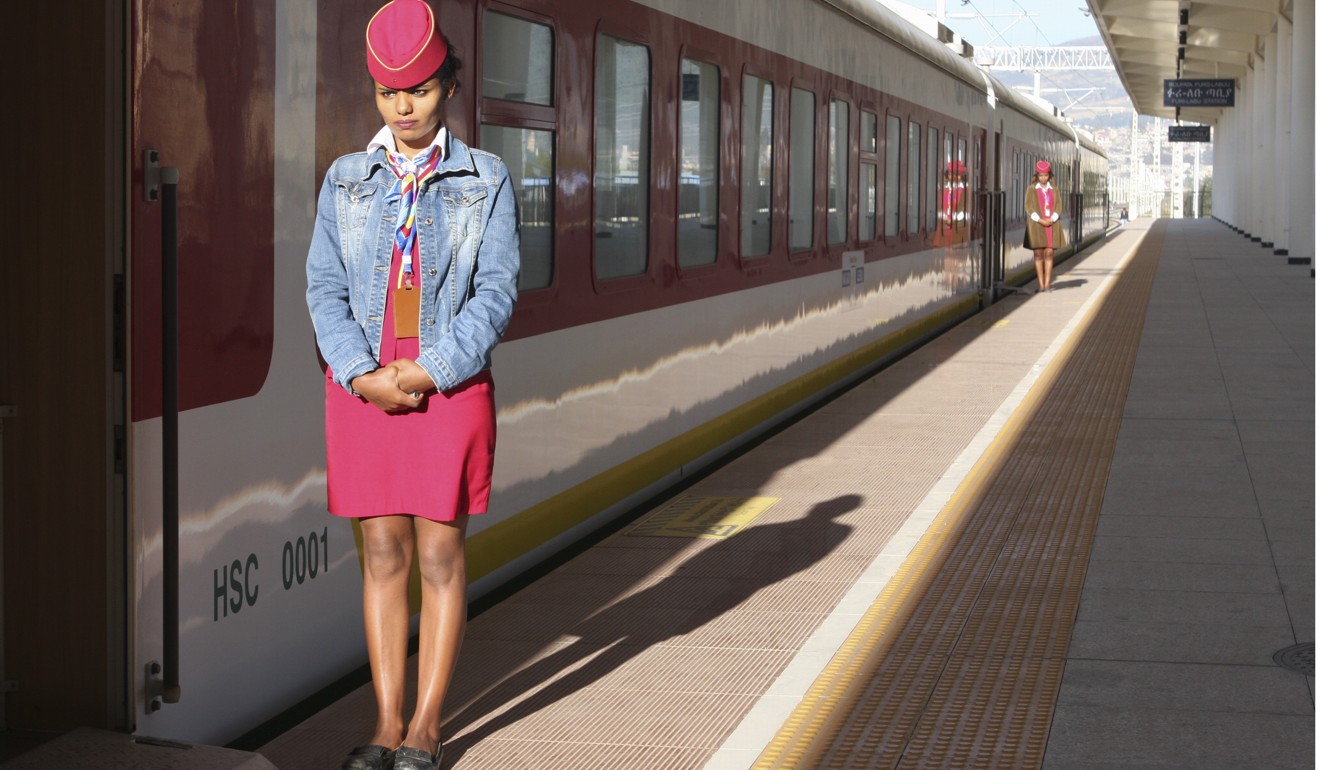 The train has a smart buffet car but it is not yet open – the contract is apparently still up for tender – so as we thread our way through the birthplace of Arabica coffee, there is no invigorating cup to lift the mood. But the farther east, and farther away from Addis Ababa, the train gets, the more the carriages come to life, as the exuberant spirit of the Horn of Africa exerts itself over Chinese conformity.

“We have had to adjust, admittedly,” says Wang Hugue, the railway line’s operations manager (who I meet in his Djibouti office), about passengers carrying khat, the mildly narcotic plant chewed all over the Horn of Africa as a stimulant but which is banned and classed as a drug in China. “Initially we didn’t allow it, but EDR said it was part of the culture, and we appreciate we can’t destroy traditions and we need to respect each other.”

Just after 3.30pm, when the train stops at Dire Dawa, Ethiopia’s second largest city, about 160km short of the border, the carriages fill with noisy women in flowing, colourful robes carrying bundles of khat wrapped in damp blankets, to keep the leaves fresh, and sweating stevedores carrying huge suitcases on their shoulders. 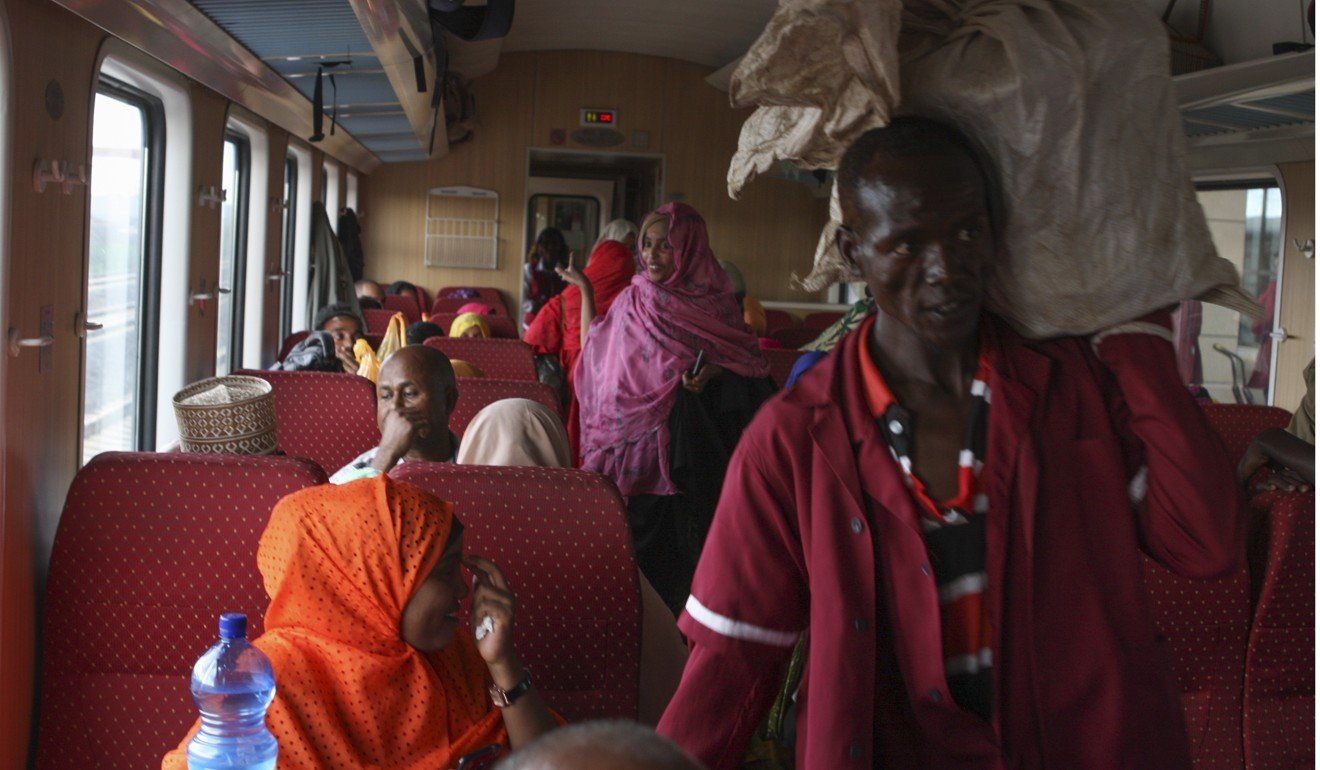 The on-board atmosphere begins to get lively. Picture: James Jeffrey

Soon after leaving the dusty town, people sprawl across seats above a floor littered with shoes, flip flips and discard­ed khat stems, chattering away in a mix of Amharic, Somali and French – Djibouti was a French colony – while sharing packed meals. It feels like an entirely different train, helped in no small part by the appearance of an entrepreneurial woman carrying thermos flasks, dispensing the first coffees of the day (and doing a roaring trade). The rather melan­cholic traditional Ethiopian music piped into the carriage earlier has been replaced by upbeat British 1980s pop music and American hip hop.

Chinese maintenance workers pass non­chalantly through the carriages, to tinker with air vents and the like. Their attention to detail seems to pay off. Although the train maintains a rather stolid 50km/h – a necessity, Wang explains, due to the number of livestock crossing the tracks – it arrives at each of the three intervening stations on the 12½-hour route roughly at the advertised time.

There were teething problems, though. One man who took the train earlier this year to Djibouti tells me that it came to a sudden, juddering halt, then began to reverse and gain speed as men with rifles gave chase. Farmers now receive compensation for lost animals. 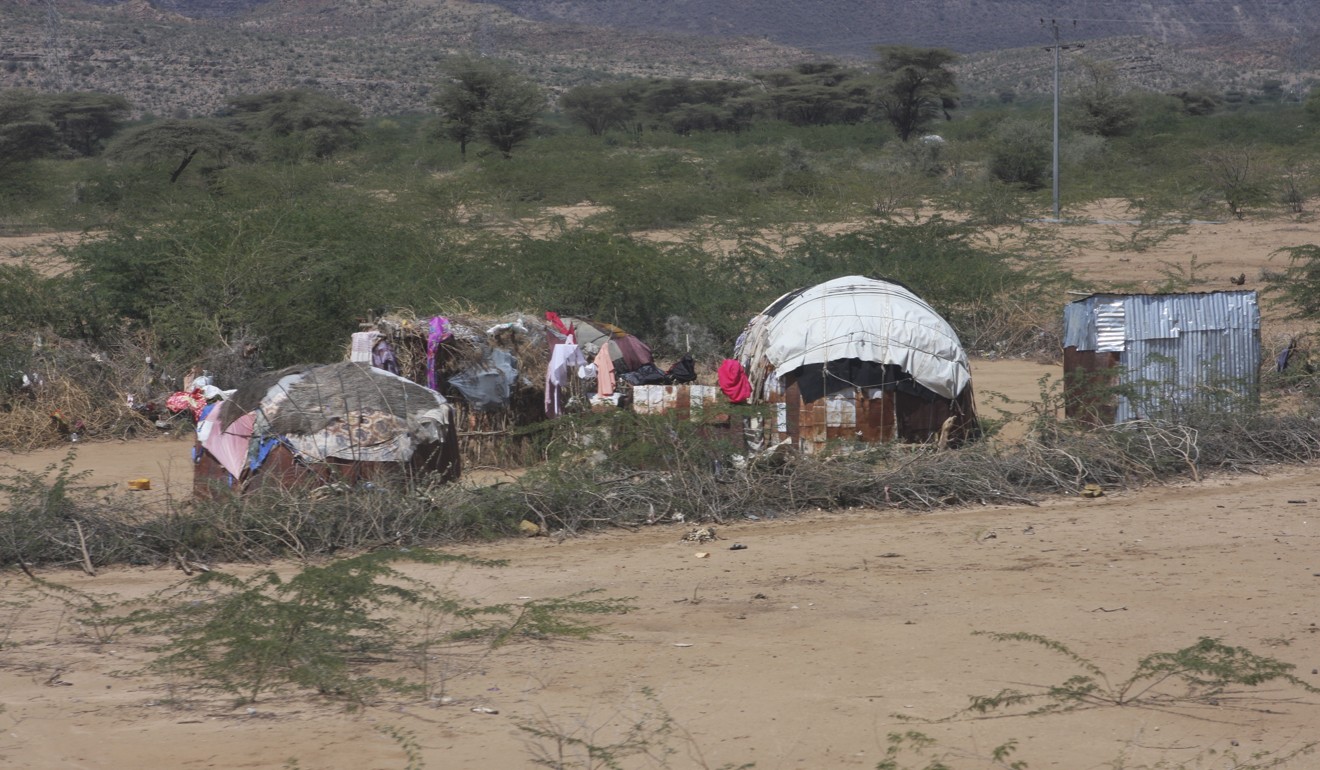 Residents from both sides of the border certainly appear to appreciate having this new transport alternative.

“Travelling by bus was really hard, you had to change buses and stay overnight – it took about a day and a half to get from Addis to Djibouti,” says Linda, a Djiboutian English teacher and fellow passenger. “On the train it is very relaxing, you can watch the scenery and meet and talk to people; if you fly no one talks to anyone.”

Passenger satisfaction, however, is tempered by nostalgia for what modern advances have left behind.

“It’s like being transported as cattle in a container: you’re sealed up at Addis Ababa before being deposited at your destination,” says another passenger, Abdikhalid, a Dire Dawa businessman who preferred the old railway line, constructed in the early 20th century, during the reign of Ethiopian Emperor Menelik II. “Before you could open the windows and at each place the train stopped, people rushed up to sell you vegetables and fruits, and gifts for your friends and family. At one stop you could get a good shirt and pair of trousers.” 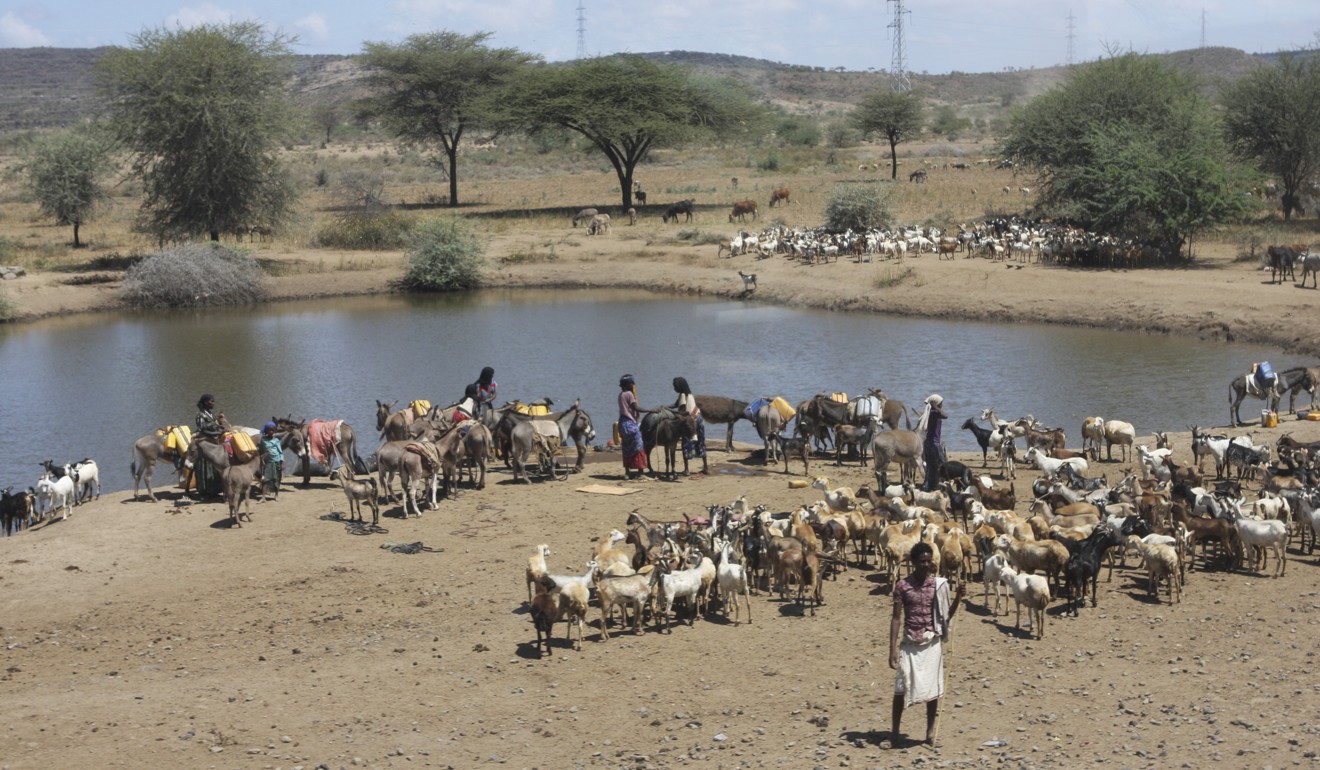 A watering hole seen from the train. Picture: James Jeffrey

At various points along the new route, the old track is visible – sometimes running alongside, or in piles of rusting segments – before the new rails diverge to take a more direct route, bypassing numerous colourful villages and towns, and the hawkers that came with them.

Glimpses of local life are still to be seen, though, as the mountains of central Ethiopia turn into lowland desert plains: a watering hole teeming with livestock; domed huts of pastoralists dotting the sandy ground; camels nibbling at sparse vegetation; a dust devil spinning in the distance.

Views of an eternal Africa are briefly obliterated as a cargo train thunders past, in the opposite direction. It is one of four running between the cities each day, servicing Ethiopia’s growing economy and its 100-million-strong population, the continent’s second largest.

As the sun begins to set, the land seems to empty and carriages quieten as the effects of the khat wear off. 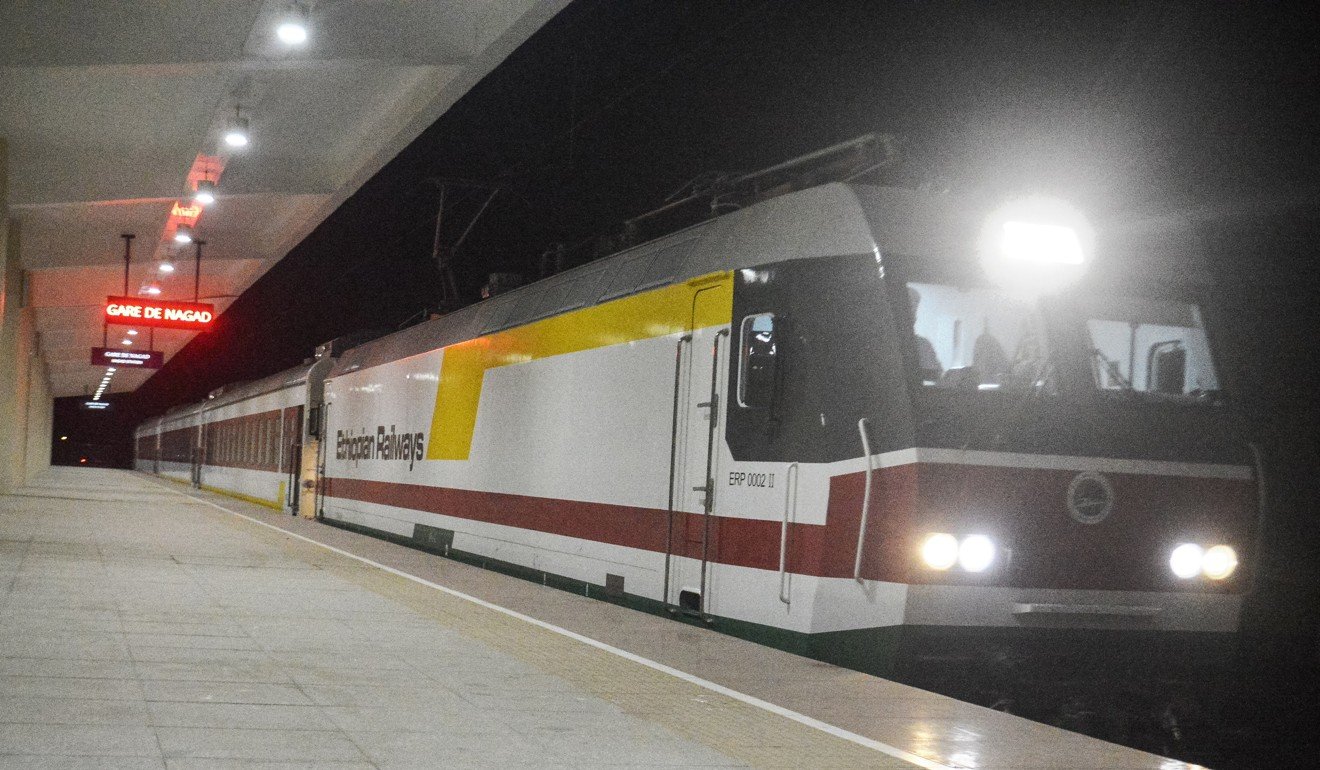 The first commercial train of the Addis Ababa-Djibouti railway arrives at Nagad railway station, in Djibouti, on January 3. Picture: AFP

The train stops at the border in darkness and members of the Djiboutian gendarmerie board to check passports and luggage. Then the train is on its way again, to cover the final 100km with only the inky black of the hidden desert outside the carriage windows.

Twinkling lights appear in the distance above a dark waterline as Djibouti City heaves into view.

Stepping off the train onto a partially covered Nagad station platform, the chilly morning air of Addis seems a long way away, replaced by the balmy Djibouti night.

Commentators say the railway line, and the freedom of movement and commerce that come with it, marks a new dawn for a region once blighted by conflict. They may well be right, though beyond the final passport inspection there unfolds a scene from a Greek tragedy. Women gesticulate, cry out and clasp their heads as customs officers seize bundles of khat. Presumably, the women have exceeded the one-kilo-per-person limit permitted on the train. 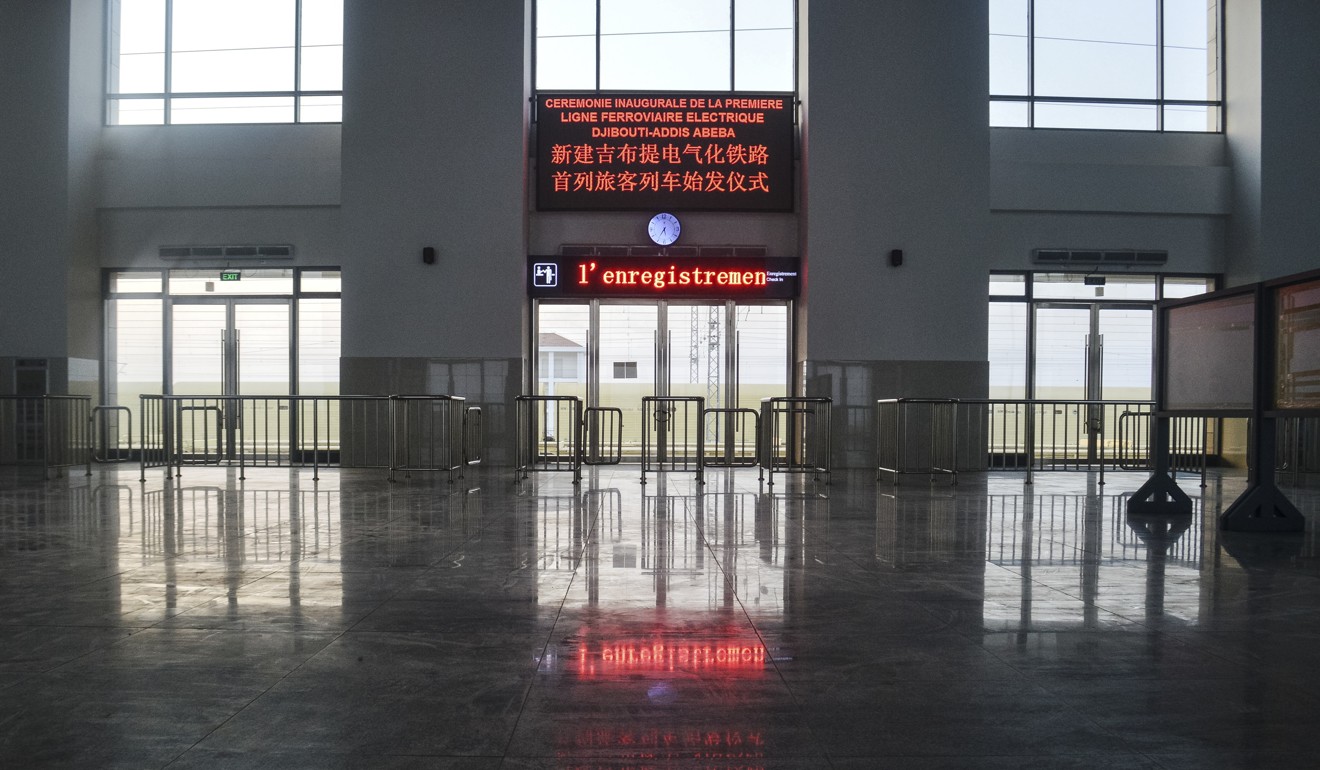 An electronic display at Nagad station, in Djibouti. Picture: AFP

“Merci, monsieur, bon soir,” says an official, handing me back my passport.

I head out of the station – passing the women still arguing with custom officers – to haggle with a taxi driver for the final part of the Addis Ababa to Djibouti journey.

The railway line can only take you so far.