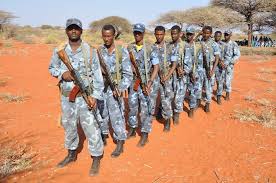 The notorious Liyuu Police Paramilitary Forces in Ethiopia’s Somali region have shot to death three civilians in Allay-baday on broad daylight on Thursday.

The Liyuu Police have made an incursion into Allay-baday, a township that lies in the border between Ethiopia and Somalia. It still remains a mystery why the Liyuu Police have made the violation by crossing into Somaliland and opened fire to innocent unarmed civilians. One of the people who died to the police shooting is a young man named Nasir Abdi Adan. He was hit by one of the bullets fired by the Liyuu Police Paramilitary Force. He was rushed to Hargeisa,  unfortunately, he was succumbed to the gunshot wounds and died in Hargeisa. Mr. Nasir returned from abroad where he graduated from a university overseas.There were 4 police officers from Somaliland who were on duty when the Liyuu Police, the Paramilitary forces made the incursion in Allay-Baday.

The Liyuu Police crossed the border with Somaliland on several occasions by violating Somaliland’s territorial integrity and carried killings. The Somali regional authority in Ethiopia apologized the incidents. Somaliland authority has not so far spoken of the killings carried out by the Liyuu police