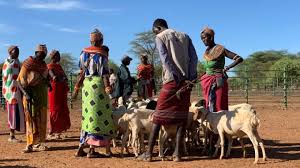 MERILLE, Kenya — Nandura Pocodo looked down and pointed at his sandals. One was red and the other was black.

“The life of a pastoralist is hard,” he said. “I walked for seven hours yesterday to bring my goats to the market to sell. You can see that my shoe broke. I had to pick up a new one along the way.”

Pocodo spends his days walking on foot, looking for water and pasture for his flock of 100 goats, four camels, and five cows. He’s been herding animals this way for most of his life.

“One of the challenges … is explaining the concept of insurance. It’s not where you put in money to get money back. It’s not an investment.”

But recent years have been particularly challenging. Weather has become erratic as climate change takes its grip over East Africa, threatening the livelihoods of an estimated 20 million livestock keepers in the region. Pocodo has consistently lost dozens of animals each year to drought. In 2017, he lost 150 goats and 15 cows.

At the market one day, Pocodo heard about an insurance product offered to pastoralists. A shared-risk model, it uses satellite imagery to analyze levels of vegetation available for animals to eat, triggering payouts if they drop too low. It is hoped pastoralists will use the money to buy food for the animals before the worst of the drought hits.

The price to insure an animal ranges depending on location. In central Isiolo in Kenya, for example, it costs about $13 to insure a cow, $18 to insure a camel, and $1 to insure a goat for a year.

Beyond insurance, the project also includes a mobile app to keep pastoralists up-to-date on weather forecasts; efforts to digitize livestock markets to develop evidence on the scale of animals traded in the region; and work to diversify family incomes away from sole dependence on livestock through savings groups. A consortium of development partners, as well as the public and private sector, are behind the CLIMARK project.

This type of insurance is just one example of tech-driven microinsurance products that have popped up in recent years aimed at providing a safety net for people living in poverty.

But rolling it out has come with challenges — including getting buy-in from the pastoralist community around the abstract idea of insurance.

“One of the challenges that we are having is explaining the concept of insurance. It’s not where you put in money to get money back. It’s not an investment,” said Carol Wangeci, a regional coordinator with Takaful. “That is the part where they sort of disconnect with the whole concept, because they start thinking that this product has failed them.”

And project implementers acknowledge the problems are about more than perception.

The Takaful insurance product is tied to the Normalized Difference Vegetation index. Developed by the International Livestock Research Institute and its partners, the index uses satellite images of available pasture during the rainy season to predict livestock mortality. Payouts are made when vegetation levels drop too low on set dates and vary according to the number of livestock insured and severity of the drought.

But while many in the development community believe insurance for pastoralists holds promise, project implementers acknowledge flaws in both the methods used to determine payouts and the timeliness with which they are made. This can weaken the trust pastoralists have in the system.

For example, the insurance is tied to conditions in the locality where it was purchased. If the pastoralist moves from that location, they might not receive a payout, even if they are in an area experiencing drought.

“If they don’t get paid, that’s when they go back and start asking the agent: ‘What happened?’” said Thomas Obiero Were, project manager of CLIMARK East Africa.

There are also questions over the interpretation of the satellite data. A type of vegetation common in the region — the mathenge plant — can appear in satellite images to show an area is vegetated. But the drought-resistant plant is not edible for livestock.

When this happens, ILRI conducts on-the-ground verifications, which can cause delays in payments, Obiero Were said.

To help remedy this, the Technical Centre for Agricultural and Rural Cooperation — a partnership between the European Union and the African, Caribbean, and Pacific Group of States, which set up CLIMARK — is looking at the possibility of using drones for cross-checking.

The set insurance schedule also causes problems. Payouts are supposed to happen on set dates, but climate change has altered the timing of the seasons.

“You may find that drought has started a bit early, but those dates don’t change,” Obiero Were said.

While those delays can result in livestock deaths, CLIMARK said creating more flexible dates undermines the risk model of the product. “If you make it so haphazard that you can pay anytime, you lose that model,” he said.

Habiba Jattani, a lifetime animal herder, has purchased insurance for her livestock since 2015. She’s gotten a payout each year, except for one year with good rains. While the insurance has helped her weather the rough seasons, she continues to have losses.

She is one of the company’s highest-paid recipients in the region, according to Wangeci. In 2016, she insured 16 cows, as well as 38 goats and sheep. She paid about $260 and received a payout of $1,500 when the region was in severe drought.

But despite the support it’s provided, one of her complaints is the timing of the payments.

“The payout sometimes comes at the wrong time when we are already in a severe drought. If possible, it would be better if we were paid earlier,” she said.

Instead, she is using her own money to buy food for the livestock in anticipation of an insurance payment, meaning funds can be tight at home. She is concerned that the satellite images aren’t detailed enough to account for varying amounts of rain in different geographical areas.

These are all factors in what is called “basis risk,” which looks at the gap between the person’s actual loss and what the index determines as the loss, Wangeci explained.

“When you talk to community members, they say: ‘Really? I think your satellite is selective. I think somebody is controlling it,’” she said. “Some even go to the extent of telling you that Takaful is manipulating the data.”

The product is profitable for Takaful Insurance of Africa only when it partners with governments or development partners to subsidize plans.

During the second payout of last year, for example, the company gave about $27,000 in payouts in the nine counties it operates in Kenya, which includes areas outside of CLIMARK’s scope. It collected about $44,400 in premiums for just over 3,000 animals.

But a key challenge is increasing the profitability of commercial sales to pastoralists such as Pocodo, who pay out of their own pocket. The CLIMARK project is focused on these types of sales.

A key impediment to this profitability is the resources needed for community outreach.

“Over and over again, you go to a community and talk to them for hours,” Wangeci said. “Then you go back the following season and you feel like you are starting all over again.”

To change this, the company is training community leaders, such as teachers, local chiefs, and shop keepers to promote the product.

Another key problem has been misinformation about the problem, Obiero Were said. “It’s like the broken telephone theory, where we pass on information — by the time it gets to the third person, it’s different.”

Because of this, the companies are standardizing their material. In Ethiopia, for example, Oromia Insurance created phone recordings about the product, translated into local languages. They are also placing advertisements on local radio stations.

“Insurance is all about numbers,” Wangeci said. “We will realize commercial profitability and sustainability when we have been able to build the capacity of the local communities.”