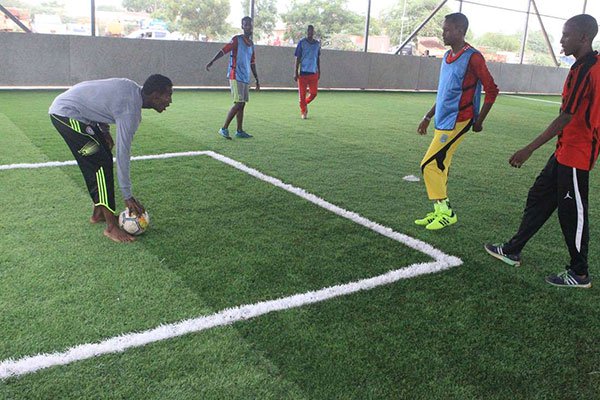 Mandera town has, in the recent past, been synonymous with insecurity spilling over from the neighbouring war-torn Somalia.

Leisure activities in Mandera have remained elusive for many years with the rag-tag Al-Shabab militants staging random attacks in the town.

Football lovers in the town have had a difficult time getting a proper ground to enjoy the game loved by many worldwide due to a lack of playgrounds.

“For long it has been difficult just to gather at a playground and enjoy football because the government officers will round us up and arrest or Al-Shabab will plant explosives that end up claiming lives,” Adan Goliya, a football fanatic told Nation Sport.

As security improves in Mandera town, a group of locals have capitalised on the lack of a proper playground and put up a state-of-the-art indoor football pitch.

The pitch is a one of its kind in a town characterised by unforgiving weather conditions throughout the year and at least five teams have already registered their membership.

Through a chat with a friend on a social media platform, Amar Haji conceived the idea which has turned out to be a reality in Mandera.

“I was just chatting with a friend from Nairobi who surprised me when he said was headed to a field to play football at night,” he said.

“He told me there is a seven aside indoor football pitch that he goes to with friends after the day’s hustle. This surprised me but I quickly took it as a business idea,” he revealed.

In February 2017, Haji shared the idea with his business associates including Ali Sala Abdinoor, Waes Abdullahi and Hussein Mursal.

The group of four invested Sh7.5 million in the project and say that they are now getting approximately Sh12,500 a day.

“We pooled our resources and within one and a half years, we have started enjoying fruits of our investment,” Haji said.

The pitch christened Mandera Sports and Recreation Centre measures 40 by 20 metres and is accessible to many residents of Mandera town and has only been in operation for three months.
Hidden explosives

“We targeted civil servants who don’t have a place to exercise after work but currently we have almost everyone interested in playing on our pitch,” he said.

“There is no better place for people interested in doing physical fitness in Mandera and coming up with this pitch that provides good conditions to exercise was the best idea ever,” he added.

The other grounds that are available to the public in Mandera include Moi Stadium and Geneva grounds that are sandy and many fear using them citing the possibility of there being hidden explosives planted in the ground.

Already five local teams have registered as members at the pitch that charges Sh2, 500 per hour of playing.

When Nation Sport visited, a local taxi owners group was in the pitch playing and lauded the idea.

“We used to spend our money on miraa after work but we now have something useful to do after work which is good for our health,” said Ahmed Abdinur, a local taxi owner and a member at the pitch. Several youths groups have also registered to play at the pitch forcing Mr Haji to allocate each team time of play.

“All our morning and evening hours are taken and we close at 9pm due to security but we have those who want to go on playing overnight,” he said.

The pitch constructed with metallic bars, has turf on the floor and soft cardboards on the walls, iron sheet rooftop with a net underneath to protect the flashlights.

“No rain, no wind, it’s not too hot. In fact, it’s perfect,” observed Said Yakub Amin, a youth who plays at pitch.

To meet the demands of potential female customers, Haji said a plan is motion to construct a well-conditioned volleyball pitch to accommodate them.

“At the moment we are not allowing females in this one because of culture and religious beliefs but we have plans to put up something that will meet the conditions to have women engage in sports as per local religion and customs,” he said.

Several female sports fans have registered their displeasure with their inability to access the pitch for exercise and play football matches.

Haji says the pitch can be used for conference facilities during the day and that he is targeting schools in expanding his market.