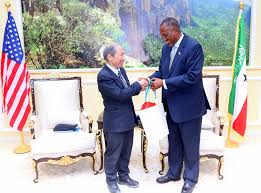 Last weekend, diplomats, presidents, and prime ministers gathered in the tiny East African nation of Djibouti. The meeting was apparently initiated by the State Department’s Bureau of African Affairs, or maybe Donald Yamamoto (the U.S. ambassador to Somalia), or perhaps it was Djiboutian President Ismail Omar Guelleh. Participants receiving the invitations said they were not quite sure. Nor did those invited initially know the agenda. Evidently, the State Department forgot to include it. Or perhaps it was not ready until the dignitaries arrived.

Either way, the whole process reflected poorly on the State Department. Country leaders heeded the American call out of a sense of respect for the United States, but such confusion and disorganization erode the reputation of our diplomats.

When officials arrived in Djibouti, the U.S. policy goal appeared to be to jump-start talks between Somalia and Somaliland, a northern state with its own precedent of independence that joined Somalia in 1960 and broke away from the country in 1991 as Somalia descended into chaos and bloodshed. Once again, however, U.S. policy is confusing.

Somaliland is democratic and pro-Western, but because of its international isolation, it is largely underresourced compared to Somalia. Somaliland is also an ally in the war against terrorism, while Mogadishu is increasingly a liability. But while the State Department long promoted cooperation between Mogadishu and Hargeisa, the capital of Somaliland, Yamamoto has instead supported Somaliland’s economic strangulation. In order to empower Somali President Mohamed Abdullahi Mohamed (whose government effectively only controls a few square blocks in the middle of Mogadishu) symbolically, Yamamoto has overseen the stripping of Somaliland’s control of its own air space, empowering Somalia to seek to ban civilian flights into the effectively independent state, and has demanded all aid and assistance monies provided to Somaliland to first pass through Somalia’s central government — where they simply disappear into the void of what Transparency International has for 16 years running labeled the world’s most corrupt country.

To side with Somalia over Somaliland was akin to seeking to dismantle Taiwan’s ability to resist Chinese ambitions and flew in the face of the U.S. government’s own Africa policy. In effect, while the State Department has been distracted elsewhere, Yamamoto has been freelancing and seeking to impose his own order on the region without any real authorization to do so from those above him. Freelancing diplomacy seldom ends well.

Nor does inattention to timing. Leaders in both Somalia and Ethiopia face dwindling popularity, and both seek to delay elections and continue their rules extra-constitutionally. By seeking to serve up Somaliland as a sacrifice for the ambitions of either is patently unfair and runs counter to long-term stability. The only positive about the Djibouti talks was they were not Ethiopian Prime Minister Ahmed Abiy’s previous hare-brained scheme to simply fly in the Somali president by force into Somaliland’s capital, a move that likely would have led to his lynching, as Somalilanders view Siad Barre’s nephew in much the same way that Kurds would view Saddam Hussein’s close relatives. It is unclear why the Djibouti talks occurred now rather than three years ago, before Somalia’s campaign of aggression against Somaliland.

Not surprisingly, the Djibouti talks did not go well. While diplomats said the initial meeting was to build trust, they do not appear self-reflective to realize that a lack of trust exists not only between Somaliland and Somalia, but also between the U.S. and Somaliland due to Yamamoto’s efforts to boycott and strangle the 29-year-old republic. Indeed, this is why a photograph of former Somali first lady, former Somaliland foreign minister, and women’s activist Edna Aden castigating Yamamoto went viral in both Somaliland and Somalia. Subsequent “technical talks” went nowhere, although some talks will continue on the distribution of aid, air space, and security, in effect, a return to the status quo ante before Yamamoto sought to unravel the understandings that had governed regional relations before he began freelancing.

That is not to say that diplomacy and peacemaking are bad; indeed, they are welcome. But if U.S.-led diplomacy toward the Horn of Africa is going to work, a haphazard approach timed toward individual diplomats’ tenures and legacies will not work. Rather, it is time for the U.S. to invest properly in diplomacy.

If diplomacy will move forward, the State Department should open a permanent office or consulate in Hargeisa. Contrary to Yamamoto’s beliefs, this need not bless Somaliland independence. After all, the U.S. maintains an office in northeastern Syria, a consulate in Iraqi Kurdistan, and an “institute” in Taiwan. There is also precedent specifically tied to Somaliland: Turkey, Djibouti, and Ethiopia have consulates, and several European states maintain offices in the capital. Nor is security a problem within Hargeisa, where diplomats walk and drive around absent security and crime is generally less than what exists in European capitals.

Within the U.S. government, opening an office would also be popular. The Pentagon, for example, remains upset that Yamamoto prevents officials from the U.S. defense attache’s office in Mogadishu to travel to Hargeisa — despite the strategic importance of Somaliland against the backdrop of the Yemen War and the regional fight against the Islamic State and al Shabab. The Defense Department is also broadly concerned that Yamamoto’s efforts to isolate Somaliland could open the door for China and Russia to make inroads there. After all, despite the myopia of U.S. diplomats, the Horn of Africa does not exist in a vacuum, and other alternatives exist.

If diplomacy is to succeed, it is also essential to signal from Washington, D.C., that Yamamoto has the full backing of the secretary of state and national security adviser. Taking his word for it, or the word of other career officials, does not cut it. Every major diplomatic initiative — peace in the Middle East, peace on the Korean Peninsula, and even the Western Sahara — has political buy-in; Yamamoto has shown none.

As much as Somali nationalists want unity, the U.S. must recognize they cannot force it. No matter how much praise the U.S. heaps upon Mogadishu, Somalia hardly represents a model to which anyone living under a democracy or seeking to invest would voluntarily subordinate themselves. For unity to be possible, Somalia has got to clean its own house. It is not an impossible task, but decisions by women such as Aden and Somaliland’s history of internal conferences in 1991 show it to be possible. Aid absent capacity does more harm than good. Every region of Somalia and Somaliland should only receive international funds when they demonstrate they can use them effectively. Nor should the U.S., a federal republic, ever try to undermine federalism to strengthen undemocratic leaders.

The Horn of Africa is important — far more important than many American policymakers realize. Diplomacy is a valuable tool to stabilize, if not resolve, many of the region’s problems. Haphazard diplomacy, however, expends goodwill and breeds cynicism. If the Djibouti talks are to succeed, there is no substitute for professionalism and real State Department investment. Open a U.S. office in Hargeisa now.