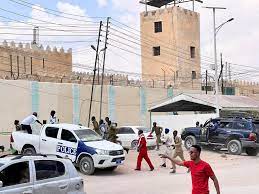 Gunfire was heard on Wednesday at Hargeisa Prison after inmates staging a rare mutiny clashed with guards and hurled stones, commander of Somaliland’s Custodial Corps said.

Heavily armed troops and police vehicles could be seen outside the jail as gunfire rang out inside the jail where hundreds of inmates are held.

Local media earlier reported an exchange of gunfire between prisoners and guards, though authorities denied the reports as groundless and said those who had spread the rumors will be held accountable.

Several journalists who were covering the incident live on local TV stations have been detained, in what authorities said was a breach of maximum security prison and exaggeration of a minor incident.

Speaking to Somaliland state TV, the region’s commander of Custodial Corps said several prison guards had been injured in a brief scuffle and no inmates were hurt, adding that troops had brought the situation under control.

The protest broke out after prison authorities ignored calls by prisoners to take action against an inmate who had insulted Allah and it turned violent after soldiers tried to disperse the crowd using batons.

Authorities used loudspeakers to ask prisoners to end the mutiny, promising that their complaints will be addressed. Officials including Minister of the Interior Mohamed Kahin Ahmed arrived at the scene immediately after the protest was ended.