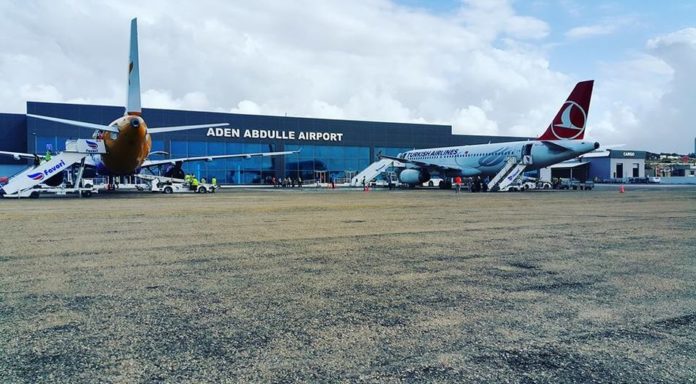 Somalia has officially fully claimed its airspace control having all foreign workers in the aviation ministry handed over their responsibilities to competent Somali nationals in the capital Mogadishu.

The team of Somali professionals will be working from a new fully equipped flight information center to control Somalia’s airspace in Mogadishu at Aden Adde int’l airport which largely protected by the African Union forces.

The handing over ceremony was attended by government ministers, lawmakers and security chiefs and officials of the int’l civil aviation organization.

Phalentine, who headed the outgoing foreign team, urged the Somali government to continue with the work they started.

“Whatever we have started now please continue because we could like you guys you are among the best civil aviation state within Africa.” Phalentine said

The Federal Minister for Transportation and Civil aviation, Mohamed Abdilahi Salad Omar said the move came after ICAO and NGO body under the United Nations handed over the space control to Somalia.

The minister of appreciated the good work of foreign workers and the ICAO organization who he said work tirelessly with the work of the aviation control office and till now they have secured locally educated staff.

“We are conducting a handover ceremony for our foreign workers who have worked with us but it should remembered the team has been working with a professional team of Somalis who were dedicated and full hardworking.” Said the minister

The United Nations Development Program UNDP and ICAO founded a civil aviation caretaker authority for Somalia following the collapse of the gov’t in 1991.