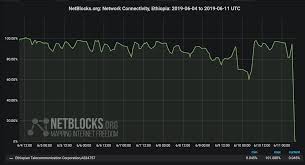 A group of Ethiopian lawyers are planning to sue the country’s state-run monopoly telecoms provider over the internet shutdown, which is now in its eighth day.

They argue that it amounts to denying citizens access to information, which they say is unconstitutional, lawyer Yohannes Enyew told BBC Amharic.

The blackout, which began last Tuesday, is affecting many parts of the country. The service resumed in the capital, Addis Ababa, on Friday afternoon but appears to be down in much of the rest of Ethiopia.

It has returned sporadically over the past week, but not for long periods of time.

The text messaging service has also been shut down since Thursday.

Ethio Telecom has not commented on the reasons behind the shutdown. But people believe it is aimed at stopping people cheating in school exams, which are currently under way.

Mr Yohannes admitted that the case could take months to reach a conclusion but he wants to create an awareness that it is possible for citizens to sue companies.

He said that if the case failed on constitutional grounds the lawyers would attempt to sue Ethio Telecom for loss of earnings.

According to Netblocks, an organisation which monitors freedom of access to the internet, a one-day shutdown of the internet costs Ethiopia at least $4.5m (£3.6m).

The lawyer, who also teaches law at a university, said that his students had not been able to access study materials because of the shutdown