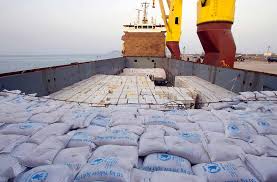 According to sources, a cargo ship carrying several thousand metric tons of food aid, which was out of date but destined by WFP for distribution to needy areas in Somalia, has recently departed from the port of Mombasa. Kenya. According to our sources, the ship is bound for the ports of Mogadishu and Bossaso, although other reports suggest that it will end up in Berbera. WFP food aid has been found to be destined for WFP to assist up to 30,000 Somalis scattered in internally displaced persons (IDPs) who are facing acute malnutrition and malnutrition. The ship was previously sent to several African countries facing food shortages, but they refused to disembark after learning that the food was overcooked and dangerous. broad health. The food, which has been in crisis for a long time, was eventually recommended by WFP officials to be sent to Somalia, as there was no objection and there were no import quality control agencies. On the other hand, media reports add that the WPF Food Ship is on board a medical team that specializes in spraying expired food so that it does not become infested with pests and weeds during the food shipment, as it happened, which meant that every day. Partially sprayed food Conclusion As far as the media is aware, WFP is planning to deploy expired food on board the ship bound for Somalia in areas without food quality inspection agencies. This is not the first time that expired food has been sent to Somalia as there have been no effective government agencies in the country for a long time to monitor the quality of food imports.