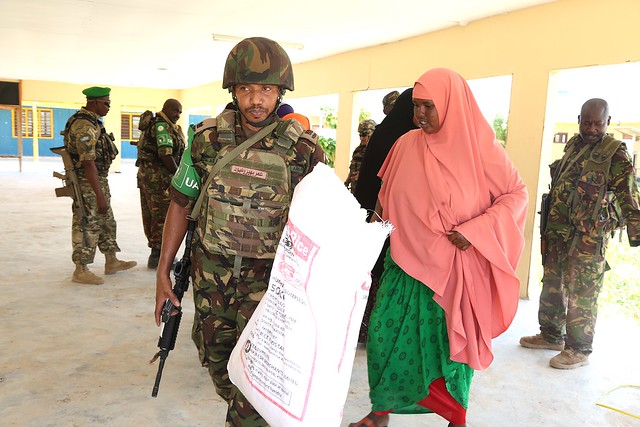 Dhobley, 4 June 2019 – Kenyan soldiers serving in Somalia yesterday distributed food and medicine to internally displaced persons in Dhobley as part of the Eid ul-Fitr celebrations following the end of Ramadan.

The donation, comprising a variety of food items and medicine, was part of Zakat al-Fitr, a charitable offering given to the poor at the end of the holy month of Ramadan to ensure the less fortunate also enjoy Eid festivities.

“We are happy to join the residents of Dhobley in preparing for Eid ul-Fitr festivals. It is an opportunity for us to share the little we have with the less fortunate members in the community,” said Brig. Gen. Ruto.

AMISOM troops have, in the recent past, intensified humanitarian activities aimed at improving the lives of residents in the border town and neighbouring areas.

Recently, the troops held a free medical camp, treating more than 200 residents of various ailments. The medical camp coincided with the start of the holy month of Ramadan.

The contingent have also been implementing various quick impact projects, the latest one being the rehabilitation of roads in the town and neighbouring areas, to ease the movement of goods and services.

“As AMISOM, we will continue assisting the people of Dhobley as we have done before by providing medical services and improving the region’s infrastructure, among other projects. Strengthening relations with the community is important for us,” added the Brig. Gen. Ruto.

He urged residents to work together with AMISOM and the Jubbaland administration to help restore lasting peace and security in the region.

Dhobley administrator, Siyad Mohamed Hassan, thanked AMISOM for the donation and called for more support from partners to help alleviate the suffering of the less fortunate.

“As the Dhobley administration, we appreciate the assistance provided by AMISOM troops in the region. Initially the assistance targeted 100 households but thanks to the soldiers the aid benefited 140 households,” said Mr. Hassan.

His sentiments were supported by the Chairman of Dhobley Internally Displaced Persons (IDPs), Muhumed Wa’adi Hassan, who described the donation as a life-saving assistance which the IDPs yearned for.

“The assistance provided by AMISOM means a lot to the IDPs since they have not received any similar assistance. Danwadaag camp in Dhobley town hosts both returnees and IDPs and it is in constant need of humanitarian support,” observed Hassan.

Abdia Moalim Yusuf, one of the beneficiaries, said the support will help relieve their suffering during Eid ul-Fitr celebrations.

“We are wholeheartedly grateful to AMISOM for the donation. We got displaced from Bu’ale and Jilib districts, we are experiencing a lot of challenges and we are very thankful for the support,” added Ms. Yusuf. 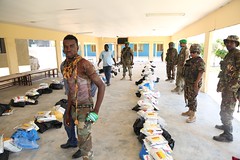 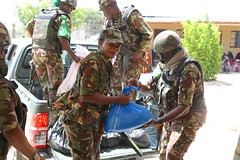 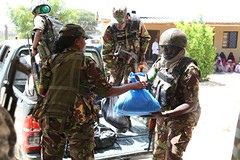 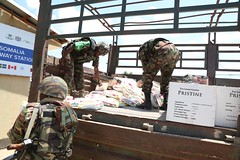 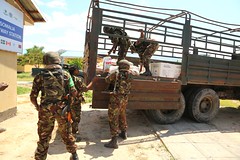 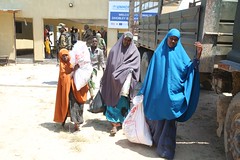 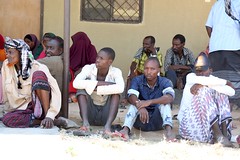 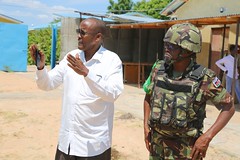 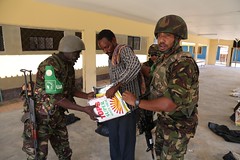 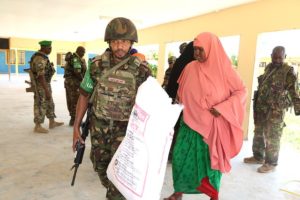