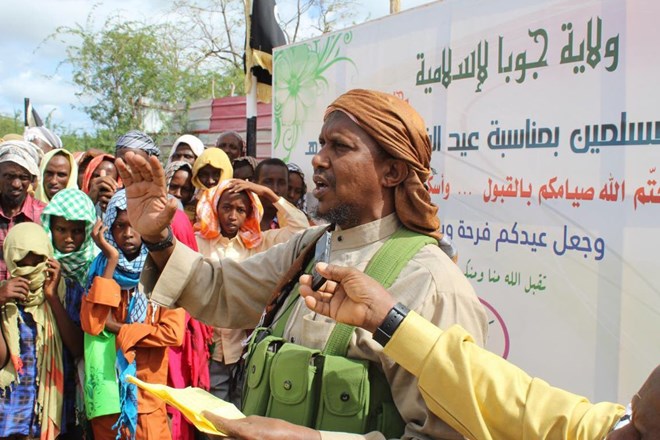 Hours after a suspected Al-Shabaab attack in Fino village within Mandera County, a notorious commander of the terrorists group was pictured leading Idd-ul-Fitr celebrations across the border in Somalia.

Throughout Ramadhan, the militants intensified their attacks both in Somalia and Kenya with their latest assault being on Monday in Mandera.

Fino MCA Saad Sheikh said the reservists came face to face with the group while on an operation in Dawaduba.

“The reservists were responding to reports of the presence of Al-Shabaab in the area when the incident occurred after evening prayers,” he said as quoted by the Nation.

And on Tuesday, Fuad Shongole, a renowned Al-Shabaab commander, was pictured in Saakow leading Eid celebrations. It’s unusual for such commanders to make public appearances.
“Fuad Shongole was the only well-known Al-Shabaab official who apparently allowed to be photographed on Tuesday. He led Eid celebrations in the town of Saakow. The former Da’wa Chief likely doesn’t hold a senior position for AS at the moment, but has been operating as a preacher,” tweeted VOA journalist Harun Maruf.

Last week, it also emerged that KDF troops may have not killed another notorious commander, Iman Ali, who has been leading onslaught against civilians in Kenya.

While KDF declared him dead in March this year, Al-Shabaab released media outlets asking for followers to pray for him, an indication that he’s alive. He’s the lead militant in Kenya.

“I’ve spoken to multiple sources when the news was reported back in March, they could not verify that he was killed. Instead, there was fresh report that he had illness; rheumatism was mentioned. I would say highly likely he is alive,” Maruf said.