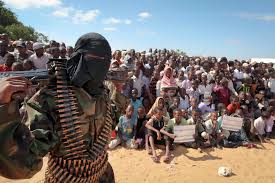 Somalia’s al-Shabab extremist group say it executed five men accused of orchestrating killings and conspiracy. The men killed by Al shabab is among a man named Mahmed Somow Ibrahim alias Borow in which al Shabab alleged that he was the ring leader of the group nabbed in Bu’ale.  Al-Shabab also asserted that it executed the men out in a public square in Bu’ale town in Jubba on Monday. Al Shabb identified one of the executed a 16 year-old by the name of Mohmed Osman Mohmud. The group also identified the other men as Ismail Said Kirib, 49; Mohmed Ahmed Adan, 42; and Abdikadir Hassan Ali, 22. The al Qaeda affiliated group accused the men of having in connection with Somalia’s spy agency. AL Shabab also beheaded Mohmed Somow Ibrahim in a public square, alleging him of being the mastermind of the killings and conspiracies’ against the group.