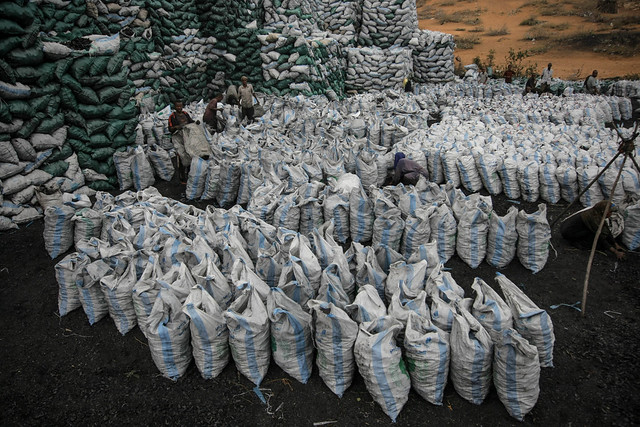 The United Nations can sometimes be a figure of fun for its breathless commitment to the dullest of minutia, but spare a thought for the members of the UN Somalia and Eritrea Monitoring Group (SEMG) as they solemnly submit hundreds of pages of reporting each year on the illicit Somali charcoal trade.

Charcoal has to be one of the most banal of topics. It’s made by slowly heating wood in an oxygen-free environment to produce a hotter-burning and smokeless fuel. But while it might not be producing any visible smoke, it is emitting an array of consequences that lead from the acacia forests of Somalia to the Royal Australian Navy. The story of how this innocuous product can have such far-reaching effects is a lesson in the need to address even the most mundane of connections to terrorism, and the consequences if you don’t.

Charcoal made from the acacia tree is prized in the Middle East for shisha and barbecues. In fact, it’s so prized (or maybe so overlooked) that many regional countries seem happy to receive it without asking too many difficult questions about its provenance.

The first part of its journey takes the charcoal from its source in the Somali acacia forests to key ports on the coast. On the way, al-Shabaab, a violent terrorist group responsible for several major attacks in Somalia and Kenya (including a truck bomb in 2017 that killed over 500 people), taxes the charcoal that passes its road blocks. Such is the volume of charcoal trade that at its height al-Shabaab was receiving US$25 million in revenue from it.

This enormous influx of wealth to the al-Qaeda-linked terrorist group prompted the UN Security Council in 2012 to ban the export of charcoal from Somalia. The ban has remained in place since then, and although the levels of export have dropped, it is far from ended—in 2018, the SEMG estimates that al-Shabaab still received around US$7.5 million from some 60,000 tonnes of charcoal.

From Somalia, the SEMG lists a veritable cornucopia of criminal activity before the charcoal arrives at its final destination. According to its diligent reporting and that of other regional investigators, Kenyan soldiers from AMISOM, the peacekeeping mission in Somalia meant to be enforcing the ban, instead allegedly oversee and profit from the charcoal’s movements at Somali ports. Paperwork disguising its origin is produced from Comoros, Cote d’Ivoire, Gambia, Ghana and Iran, some completely forged, some produced by corrupt government officials. At its trans-shipment point in Iran, the charcoal is switched to bags that further disguise its Somali origins, before making its way to Dubai where agents well aware of its dubious origins distribute it to its final buyers throughout the Gulf.

Aside from terrorism, corruption, smuggling, bribery and organised crime, Somali charcoal also has another devastating consequence: the deforestation of Somalia. Such is the rate at which this occurring that the SEMG estimates between 2011 and 2017 a tree was cut down on average every 30 seconds. The rapid deforestation is compounding the severity of both drought and flooding across Somalia. Oxfam is warning that, if the prevailing climate and conflict risks continue—and unless the 2019 humanitarian response plan receives a rapid and substantial boost (it’s only 13.5% funded at present)—there’s a real risk of famine.

Despite the UN’s numerous warnings, exhortations and outright begging for support from regional states to enforce the ban, the illicit trade has continued. Somalia is unable to prevent the trade without help. Kenya robustly refutes any suggestion its soldiers are facilitating the trade. Regional countries make half-hearted statements supporting the ban but do little to enforce it.

In 2014, the UN finally turned to the broader international community, as represented by the Combined Maritime Forces (CMF), to interdict the shipments on the high seas. Little is said in the relevant resolution about how exactly this is to take place, other than that it is to be done in an ‘environmentally responsible manner’. This is a headache for anyone planning to actually enforce the ban, as the resulting options are either to somehow try to transfer the cargo onto another ship—a logistical feat of epic proportions at sea—or escort the detained vessel to the nearest friendly port and persuade them not only to take the cargo but also to dispose of the ship and its crew (in an environmentally responsible manner, of course).

Australia is a prominent and longstanding contributor of ships to the CMF and has impressive bragging rights in the hundreds of tonnes of drugs and weapons it has seized to date, but there is no mention of charcoal in any of these reports. That’s not surprising, as one vessel in an enormous ocean must make hard decisions about where it is needed and what its strategic priorities are. Should the CMF, and by extension Australia, actively try to prevent the illicit charcoal trade, thereby tackling terrorism, saving Somali lives, and reducing the risk of environmental disaster? If not, how much responsibility do we have to pressure regional states to enforce the ban? Is the political capital required really worth it?

It’s only charcoal, after all.

Elizabeth White is a research fellow at the American Chamber of Commerce in Australia. The views expressed in this post are her own and do not necessarily reflect the views of her employer. Image courtesy of AMISOM Public Information on Flickr.