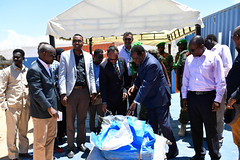 Mogadishu, 28 April 2019 – The African Union Mission in Somalia (AMISOM) has donated non-food items to help alleviate the suffering of residents of Sabiid town which was captured from Al-Shabaab early this month.

The consignment comprising blankets, polythene sheets, and mosquito nets, among other items, was handed over to the Federal Government of Somalia (FGS) officials by the Special Representative of the Chairperson of the African Union Commission (SRCC) for Somalia, Ambassador Francisco Madeira.

“AMISOM and the African Union through its partner, South Korea, has procured non-food items to meet urgent humanitarian needs of the populations in Sabiid and other areas in Lower Shabelle,” Ambassador Madeira said during the handing over of the consignment in Mogadishu, yesterday.

The items will be distributed to more than 3000 residents, mainly families displaced by Al-Shabaab militants, prior to the liberation of the bridge town in Somalia’s Lower Shabelle region, by a joint AMISOM and Somali National Army force.

The conflict in Somalia, Ambassador Madeira, noted needs to be tackled through a holistic approach, combing the military option with the provision of basic needs in order to achieve lasting peace and security.

“AMISOM understands that peace and stability can only be achieved and sustained by fighting Al-Shabaab in areas it occupies and also ensuring that the basic needs of the residents in liberated areas are met,” Ambassador Madeira observed.

Federal Deputy Minister of Humanitarian Affairs and Disaster Management, Abdirashid Mohamud Hassan, who received the consignment on behalf of the government, said the donation will go a long way in improving the lives of the residents of Sabiid and neighbouring areas.

“We appreciate the support provided by AMISOM in the area of humanitarian aid and security. We will eternally be grateful for your support,” Mr. Hassan said.

The items will be used to shelter the displaced families from the harsh weather and protect their children from diseases like malaria and pneumonia.