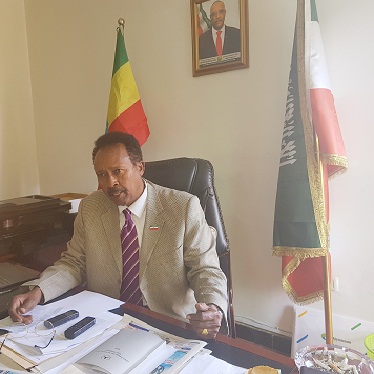 ADDIS ABABA- Ambassador of Somaliland’s Permanent Diplomatic Mission to Ethiopia, Ahmed Egal said that the Berbera Corridor Project would be launched at the end of February aiming to play role in handling Ethiopia’s ever-increasing import-export shipment. Speaking to The Ethiopian Herald, the ambassador stated that the project envisioned to connect Ethiopia and Somaliland via highways and railways thereby providing seamless services for Ethiopia’s cargo. While the drive way distance between Addis Ababa and Berbera Port is only 11 hours, the roads are also in a good condition. Noting the two parties intertwined fate, he said that the development of Berbera Corridor would not be successful without Ethiopia’s participation and its acquisition of 19 percent of share in the Berbera Port opens a new door of cooperation.

Ambassador Ahmed stated that the Port of Berbera is beneficial to Ethiopia get additional sea access and satisfy its quest for port services which has been aggravated by the massive economic progress of the past decade and plus years. The existing geo-political trend requires the expansion of the Berbera Port and Somaliland wants to connect with Ethiopia by all available means, he said, adding that the growing interconnectedness is mutually beneficial for the people and economies of the two sides.

The project would also play a significant role in enhancing the two parties trade exchange which is characterized by Somaliland’s import of Ethiopia’s agricultural and industrial outputs. It is estimated Somaliland imports to Ethiopia worth over 800 million USD annually. Regarding regional issues, the ambassador indicated that Prime Minister Abiy’s medemer(synergy) policy has been bringing a positive climate in the Horn of Africa and Ethiopia has become a rising power in the region.

Ethiopia has also been playing a unique role in the realization of infrastructural driven economic integration and deploying peace enforcing missions in various hotspots of the continent. Both leaders of Ethiopia and Eritrea took a wise step to end hostilities and pursue economic and political partnership that is heralding a new era of good neighborliness in the Horn of Africa and beyond.

About Somaliland’s quest to become a sovereign state, Ambassador Ahmed said that African Union realized the issue and sent a Fact-Finding Mission in the area and called on members to “find a special method of dealing the case.” The Mission report commended the new nation of Republic of Somaliland for its progress, but this document has yet to be tabled and discussed, he noted.