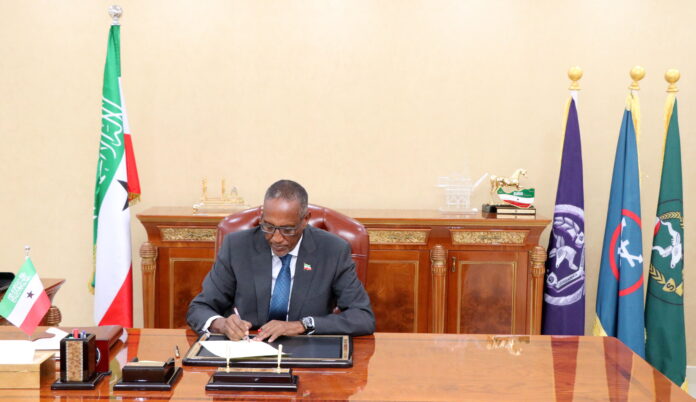 President Musa Bihi Abdi of Somaliland has reshuffled cabinet and appointed new ministers for Foreign Ministry, health, agriculture and Water development. Bihi has appointed Esse Kayd Mohmud Raagsaale as the new SL Foreign Affairs Minister. The post remained vacant for months. The President at the same time shifted assistant FM Liban Yusuf Osman to the health ministry as the assistant minister. In the presidential decree, the Head of State has dismissed key ministers in the cabinet in the mini-reshuffle. He dismissed the religious and endowment minister, Sheikh Khalil who is the longest serving minister in the cabinet since Kulmiye assumed power in 2010. The agriculture minister, Ahmed Mumin Seed has also been sacked. The president appointed Mohmed Haji Osman Jama as the new agriculture minister. The youth and sports minister, Boss Mire has been fired in the reshuffle. The chairman of Somaliland’s Civil Service, Farhan Adam Haybe, has been sacked along with the governor of the central bank, Ali Ibrahim Baqdadi. The minister in charge of transport, Abdilahi Abokor, has been transferred to the ministry of Public Works and Housing. Bihi appointed the transport ministry to Mr. Abdirisak Ibrahim Mohamed Atosh. The President has sacked Mohamed Derie as the minister of water affairs. He appointed to the post Mr. Ali Mohamed Hasan Jama as the new water affairs minister. The former minister responsible for Public Works and Housing, Hon. Abdirashid Qambi has been shifted to the Sports Ministry. The planning minister, Mr. Hasan Gaafaadhi, has been shifted to the health ministry. The ex- health minister, Abdilahi Omar Bade has replaced Gafadhi as the planning minister in the presidential reshuffle. The president has shifted the investment minister, Mr. Mohmed Ahmed Mohmud Awad as the new head of SL mission to Ethiopia.