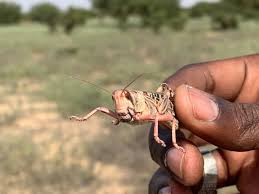 Farmers in Awdal and Salal regions of Somaliland are seeing their crops and their livelihoods eaten up in front of them by a new plague of locusts hatched from the larvae left behind by last year’s swarms.

Among the worst affected areas are Baki, Dila and Harirad, where farmers have already incurred huge crop losses, dashing their expectations of harvesting produce at the end of April to meet the Ramadan demands.

Abdirahman Hussein Mohamoud, a farmer in Harirad, 10 km east of Borame town, told Radio Ergo that he had been hoping to harvest watermelons, tomatoes and onions by the end of April. The new wave of locusts has destroyed everything.

“I have invested about $5,000 in the farm and was expecting to harvest a lorry-full of watermelons – about 3,000 pieces – but it has all come to nothing,” he told Radio Ergo.

He added that the new locusts were voracious and had effectively wiped out all vegetation on his three-hectare farm, on which he relies to support his 10 children.

Local farmers have been using various means to try to deal with the hatching locusts, including digging trenches to bury them. But those methods have failed to deal with the growing number of locusts.

The locusts have destroyed about 300 farms in the area, whose produce would normally be sold in cities like Borame and Hargeisa and across the border in neighbouring Djibouti.

Abdi Subbane, another farmer in Harirad, told Radio Ergo that he invested $6,000 in land preparation, buying seeds, and paying for labour on his farm. He planted watermelons, onions, tomatoes, pumpkins, capsicums and spices, but all have been devoured by the young locusts.

“They have taken over the farms, eating their way through them and stripping the plants to stalks. They are hopping around town, as well as on the farms,” Ali said.

The Somaliland Ministry of Agriculture described the locust infestation in Harirad as a crisis.

Mukhtar Abdirahman, the ministry’s focal point for locust response, told Radio Ergo that in addition to the population that has spawned locally, there are new locust swarms that have crossed from Ethiopia and are now threatening local farms and pasture lands.

In the past month, he said, two types of locusts have been identified in several areas of the country.

“New swarms have entered from Ethiopia and are leaving behind their eggs. There is also fear that additional swarms will come with the westerly winds,” Mukhtar said.

He added that the ministry and the Red Cross have embarked jointly on spraying efforts and are also digging large holes to bury the hatched locusts in order to control the growing menace.

“Local farmers seem to have woken up to the challenge and are collaborating with us in the effort,” said Mukhtar.

He warned that unless the threat was brought under control soon, the new locust swarms from Ethiopia would most likely dispossess local farmers and herdsmen and lead to their displacement.