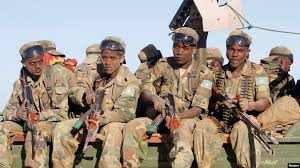 Osman Abdimalik Malim, a special forces (Danab) commander, told local media that Somali forces liberated the villages in the lower Shabelle province after a military operation in the region.

During the operation, in addition to killing 20 terrorists, the Somali forces wounded several others, he added.

He said that the operation will continue until the group is wiped out the region.

This operation comes four days after an al-Shabaab-claimed suicide truck bombing at a busy intersection in the capital Mogadishu killed some 80 people, people including university students and two Turkish nationals.