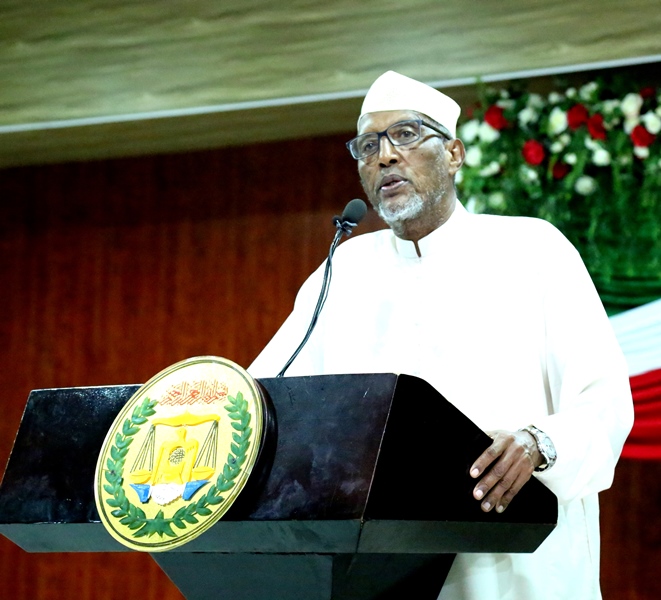 The President of the Republic of Somaliland H.E. Musa Bihi Abdi laid to rest a bone of contention emanating from an article in the just concluded resuscitation of Somaliland-Somalia Talks.

The Head of the State pointed out that the agreement concerning the free movements of the people to and fro between Somaliland and Somalia was based on international legal norms hence there was no reason for panic.

The President made the clarification in this respect to the audience and the nation at large at the Presidency on Friday night during a function marking the 60th Anniversary of Somaliland’s Independence from the colonial yolks of Britain.

The ceremony was graced by the Supreme Court Chief of Justice Adan Haji Ali, Hon Bashe M. Farah, who is the speaker of the Parliament, former Vice-presidents, the heads and top officials of all three official political parties KULMIYE, UCID and WADDANI, cabinet members, Djibouti, Ethiopia, and Turkish representatives, members from both houses of the Parliament, eminent personalities drawn from the political, business, clerical, intellectual circles and women fraternity amongst others.

In his speech, the president dwelt at length on the resultant repercussions following the unfortunate and ill-fated union with the former Italian Somali country.

He however cleared the air following disgruntlement from a section of the residents as concerns free movements between the two countries agreed upon which may have been misconstrued to mean integration.

The President declared that whoever wanted to go to Mogadishu or Somalia for that matter, for instance in a sporting game, would have to use Somaliland passport as obligated by international norms hence it was vice-verse for those from Somalia.

At 0.00 hrs the Somaliland flag was hoisted to mark the climax of the function of the Independence Day anniversary.

On the other hand, other speakers during the function were Sheikh Abdilahi Sh Ali Jawhar, Somaliland envoy to the Somaliland-Somalia talks Lady Edna Adan, Hon. Bashe the speaker of the national Parliament, to name but a few.

The outspoken clergy Sh Abdilahi spoke at length giving details on all phases of Somaliland politics starting from the independence, the ill-fated union, the re-assertion of this nation’s sovereignty to the present status of cherishing a thriving statehood.

Lady Edna on her part focused on the special affinity the Somalilanders had with the 26th June Independence Day that charts out the peoples’ destiny, hence appealed to the populace wherever they were to guard their sovereignty.

Hon. Bashe underpinned the importance of the talks hence underscored the fact that they were based on two entities as separated sovereign states.

He said that it was two neighboring countries with Somaliland in pursuit for her aspirations.

Other parts of the country also saw the celebrations the day being marked.