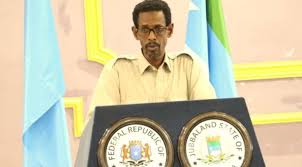 Jubaland state government has accused the Federal gov’t of imposing restrictions on a plane loaded with humanitarian aid and medical supplies destined for Kismayo, the administrative capital of the state. This was disclosed by Jubaland VP Muhumed Siyad Adan, in a press conference held in Kismayo. Mr. Sayid, the first deputy president, has reiterated that Jubaland state will soon issue a statement on the travel restrictions imposed upon by the Federal government during this difficult time where the country is facing the deadly Covid-19 pandemic. The Federal Gov’t had rejected two Somali lawmakers to travel to Kismayo to attend the funeral of late Jubaland education minister, Mohamed Ibrahim Mohamud, who passed away in India last week. The ties between Jubaland state and the Federal government strained during the re-election of Jubaland president Ahmed Madobe to his third term in August last year. Jubaland state severed ties with the SFG during the controversial election of Ahmed Madobe to the presidency.