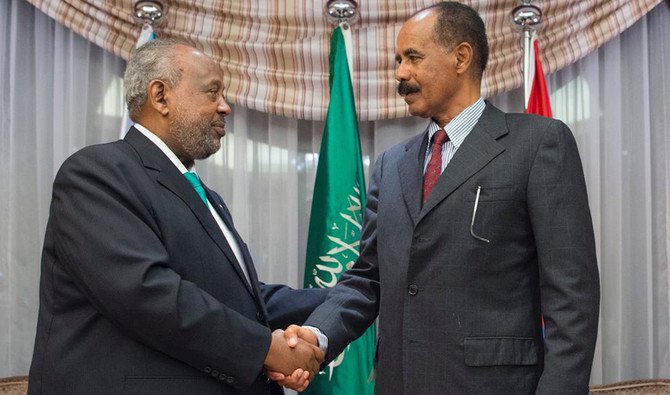 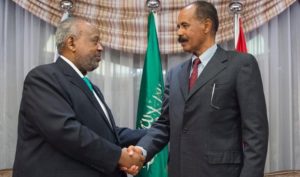 JEDDAH: Leaders of Eritrea and Djibouti met in Saudi Arabia on Monday for historic talks a decade after a border conflict strained ties.
Presidents Ismaïl Omar Guelleh of Djibouti and Isaias Afwerki of Eritrea shook hands as they met upon the invitation of the Saudi leadership.
Dr. Essam bin Saad bin Said, minister of state and member of the Saudi Council of Ministers, and the Saudi Foreign Minister Adel Al-Jubeir attended the meeting.
Both presidents expressed gratitude for King Salman and Crown Prince Mohammed bin Salman for facilitating the meeting, which opens a new chapter for relations between the neighbors.
The two nations have been at loggerheads for decades over a long-standing border dispute.
“There is a wind of hope blowing in the Horn of Africa,” said UN Secretary-General Antonio Guterres, who attended the signing of a historic peace agreement between Ethiopia and Eritrea in Saudi Arabia on Sunday.
Saudi Arabia and its ally the United Arab Emirates are helping broker peace in the region, in a sign of the growing importance the Gulf nations put on east Africa as they battle Iran-backed Houthi rebels in Yemen.
Dozens of commercial vessels transit daily through the Bab Al-Mandeb waterway, a crucial shipping lane between the Arabian Peninsula and the Horn of Africa.
Houthi rebels have launched a number of attacks on ships during the Yemeni conflict.