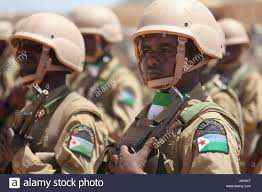 Al shabab group has fired mortar shells at a base manned by Djibouti troops in Beledweyn in Hirian province of Somalia.

According to eye witnesses, the shelling by the militants did not hit its targets but the peace keeping troops responded with heavy artillery and where had all the city.

It is not immediately clear the casualties caused by the shelling as Amisom officials did not comment on the incident. With the help of African Union, the peace keeping troops, Somalia’s national army in the past recaptured key towns of strategic Lower Shabelle region from the armed militant group al shabab.

They include Janale, El Salini, Anole, Awdhegle, and Barire.

Somalia’s Federal Govt started implementing social services to have its presence in the areas.