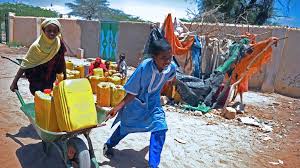 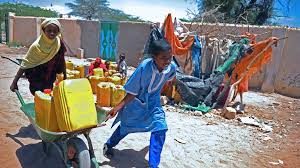 Hargeisa the most populated city in Somaliland has experienced exacerbated water shortage due to the lack of modern pipeline infrastructures that can transmit water to all districts in Hargeisa.

Established by the British colony the pipelines transmitted enough water to satisfy the need of the people at that time. Currently, Hargeisa has exponentially been expanding and it could no longer respond to the growing water demands.

The areas that receive water through the pipes are some of Ibrahim Koodbur and 26 June, that’s around 35% of the population whereas 65% receive it through water trucks and donkey carts. This has resulted to economic spatiality as the water is accessed by areas that are resided mostly by the rich, which means that the Water Agency is looking to earn
more profit than prioritizing the distribution of water to the citizens. Unfortunately, this has resulted in a huge burden on the poor and the middle class as they have to pay higher to get access to water despite the high standard living costs.

If this goes on without the government digging deep and creating innovative solutions to counteract the dynamics of water distribution, it might cause social unrest that ma. Water inaccessibility may cause social insecurity due to social disparity such as burglarizing people to get money to afford water costs.

Water insecurity may increase in the future as the people flourishing to the capital are increasing if there are no policies set to manage it. It can also contribute to social protests that can cause security upsets.

Nevertheless, lack of trust in the government due to faux promises and finally using corruption to gain access of water.

Improving water security (management or technical efficiency) requires us to consider how water is linked to the national economy in different ways.

Equally important is an understanding of how alternative policy instruments influence water security among different economic sectors and across different scales of activity.

Recommendations
1. The privatisation of water utilities with the management of water systems being transferred to private firms, autonomous utilities, might improve management and reduce costs.