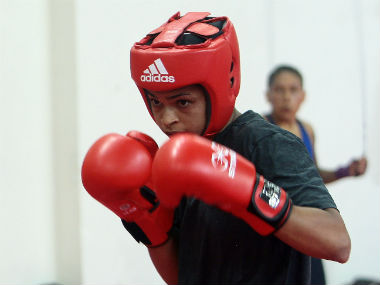 Ramla Ali is at peace. As the rest of the national capital chokes on the noxious fumes that engulf it on an indifferent November afternoon, Ramla sits in an opulent New Delhi hotel without a care in the world. “I probably had the worst year of my life in 2017. But things started changing around for me at the start of this year,” says Ramla. “It’s all a bit… surreal.”

That word could form the theme of Ramla’s life.

Many years ago, after her elder brother died due to a grenade explosion outside their house in Mogadishu, her family undertook a journey to seek safety elsewhere. It took them first to Kenya on a rickety, cramped boat and then, many, many months later, to England, which granted them asylum.

Now, Ramla is going back – metaphorically. At the upcoming AIBA Women’s Boxing World Championships, she will represent her ancestral country of Somalia – thereby becoming the first boxer, man or woman, to do so.

It would have been easier to participate in English colours. A spot in the England team came with access to cutting-edge facilities, better exposure on the world stage and the consequent opportunities. On the other hand, Somalia didn’t even have a boxing federation, the existing one being removed from existence in 1976 by the military government.

So, she remedied it. She started a new boxing federation, with help from her coach-turned-husband Richard Moore.

“There have been so many instances in the past two years when she had to go through a frustrating phase while she waited for the switch to happen (to play for Somalia). There were days she would say, ‘I am done’. But each time she has said those words, she returns more determined than before to the ring. That is what makes her an absolute fighter,” says Moore.

Ramla’s fighting nature became evident very early in her childhood as she became a boxer at the age of 12 despite knowing her conservative family would never agree to let their daughter compete in a “man’s sport”.

“When I look back now about the lies I told my mother to go to the gym to box, I would have never believed them myself. I wonder how she did,” Ramla says with a glint in her eye.

The lies Ramla is talking about used to be as varied as they were inventive. One time, in her bid to compete at the European Boxing Championships, she convinced her mother that her best friend was getting married in Germany. So elaborate was the lie that she even convinced her friend to get in on the deceit.

On other occasions, Ramla invented school excursions in France and Spain so that she could compete in boxing events. “I come from a very conservative Muslim family. I knew my family would never agree to let me box. My mother would have said, ‘boxing is not something women do’. So I hid my obsession with boxing,” says Ramla, whose father is an imam.

But what of the inevitable bruises and pockmarks from the punches taken on the face during competition or even sparring sessions? More lies.

“I would tell her that it happened in school. Once, I told her a dog scratched me,” she says.

But earlier this year, when she won a competition, her family discovered her exploits in the ring on the news channel and her almost 15-year heist came to an end.

Initially, there was a lot of resistance, particularly from her mother. Not anymore.

“I’m representing our homeland. What more could she ask for?

“I’ve gone through a lot of hardships for this sport. I’ve suffered. I’ve even lied to my parents. But I know I can’t stay away from boxing. This sport is my life,” says Ramla.