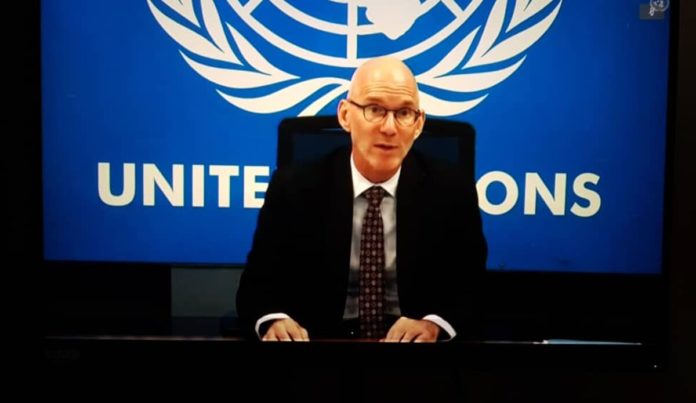 Good evening from Mogadishu and Ramadan Mubarak to our Somali brothers and sisters as we approach the Eid-al-Fitr.

Somalia, like the rest of the world, is focused on confronting the COVID-19 pandemic.  Somalia has more than 1,500 recorded cases although the actual figures are almost certainly much higher.

The consequences for Somalia are acute.  Even before COVID, more than 5 million Somalis required humanitarian assistance.  The 2.6 million internally displaced persons are particularly at risk.  Nearly one million Somalis are now affected by flooding, and the country also faces its worst desert locust infestation in some 25 years.

In addition to the medical and humanitarian effects, COVID is also having a severely negative economic impact on Somalia. Revenue generation and remittances from the diaspora have dwindled.  The Federal Government projects an 11 percent decline in nominal GDP for 2020.

The UN family is working to reinforce the Government’s response.  UN Agencies, Funds, and Programmes have reoriented their activities to give priority to COVID.  As just a few examples, the World Health Organisation has expanded Somali hospital capacity, established isolation centres and supported testing laboratories.  UNDP has provided generators.  UNSOS and the UN Humanitarian Air Service have provided vital air transport and other logistical support.

Somalia’s ability to respond to COVID is greatly aided by having achieved the decision point under the Heavily Indebted Poor Countries Initiative on 25 March. This historic milestone recognized Somalia’s improved public financial management and has now enabled Somalia to become eligible for additional budget support and grant financing.  The World Bank and UN agencies such as WFP are also fast-tracking economic recovery and cash transfer investments to help shore up livelihoods and resilience.

In addition to its direct response, the UN family has supported the Government by engaging and coordinating help from the broader donor community.  On 23 April, the UN in Somalia issued the Country Preparedness and Response Plan for COVID-19 in support of the Government.

Prior to the global pandemic, Somalia had set ambitious national priorities for 2020.  These include the holding of the first direct elections in Somalia since 1969.  As this Council noted in November, the holding of peaceful, inclusive, credible and transparent one-person-one-vote elections would be a historic step in rebuilding Somalia and would assist with the country’s continued democratic development.

The coming weeks will be decisive in determining how Somalia will proceed to these elections.  The parliamentary Joint Ad Hoc Committee is expected to present its recommendations for resolving the issues omitted in the Electoral Law passed in February.  These include designating constituencies, allocating Upper House seats, and guaranteeing thirty percent of the parliamentary seats for women.  Parliament must also adopt amendments to the Political Parties Law to conform to the Electoral Code.

The Chairperson of the National Independent Electoral Commission will also report to a joint session of the Houses of the Parliament on plans for conducting elections within the constitutional timeframe.

These Somali institutions will determine the pathway to elections.  Somalia’s partners must then be ready to mobilize the technical support and financial resources needed for implementation.  The work of the National Electoral Security Task Force must also accelerate to ensure the necessary security arrangements for voting to take place.  Equally importantly, there will be a need for consensus building among political leaders and across Somali society to ensure that the elections enjoy broad support and acceptance.

In addition to the focus on elections, we also note the importance of Somalia making progress on other critical state-building priorities.  These include formation of the Constitutional Court, the Judicial Services Commission, and an independent Human Rights Commission, as well as completing the review of the Federal Constitution.

Effective democratic competition also requires an enabling environment that protects freedom of speech, assembly, and organization.  I call on the Federal Government and Federal Member States to ensure these are fully respected, especially during this critical election year.

Turning to the security situation, let me first pay tribute to Somali security forces and the African Union Mission in Somalia for their continued sacrifice in the pursuit of peace.  AMISOM completed the reduction of its troop ceiling by 1,000 troops on 5 March, as decided by this Council. UNSOS is currently providing logistics support to 19,626 AMISOM uniformed personnel, as well as to 10,900 Somali Security Forces, supported by the Somali Security Forces’ Trust Fund.

Since my last briefing, Somalia has made progress in recovering areas occupied by al-Shabaab. On 16 March, the Somali National Army and AMISOM liberated the strategic town of Janaale in Lower Shabelle.  Somali-led forces have held the town since then, and efforts by the Federal and South West State authorities to return governance, justice, rule of law, and stability to the town, are ongoing, supported by UNSOS and UNSOM and other partners.

Meanwhile, institutional reforms have continued in the security forces, including improvements to management and personnel systems.

As set out in the Joint FGS-AU-UN Threat Assessment concluded in January, the threat of al-Shabaab has continued to evolve. The group inflicts intimidation and violence not only through Improvised Explosive Devices, mortar attacks and assassinations, although these continue.  They also deploy extortion, illegal commercial activities and criminal tactics.

We regret that al-Shabaab has not embraced the Secretary-General’s appeal for a global ceasefire, and that their terrorist operations continue unabated.

In regard to the specific IED threat, Somali security forces would benefit from additional support to counter this deadly menace. I look forward to the briefing by the Director of the United Nations Mine Action Service later in this session.

I welcome the Federal Government’s commitment to revise the Somalia Transition Plan to update the timelines and identify key tasks and gaps in response to the evolved threat from al-Shabaab.  The Government has signaled its commitment to reinforce the Comprehensive Approach to Security, and we also welcome that.

Regrettably, COVID-19 has slowed international partner training necessary to generate forces needed for the fight against al-Shabaab which may impact the pace of future operations.

We have valued the recent inclusive conversations among Somali security leaders and key international partners held to discuss requirements and configuration for international support to Somalia’s security sector in the coming years.  We look forward to continuing these discussions to strengthen our collective efforts.

Turning to developments in regard to the Federal Member States, we have been encouraged by recent progress on dialogue and reconciliation in several of them.  These include Galmudug (where a broadly representative new cabinet has been appointed), South West (where elders have selected a new parliament), and Jubbaland (where former political rivals have agreed to work together and to pursue further reconciliation).  In these and other Federal Member States, we urge continued efforts at dialogue and outreach to all communities to permit inclusive governance for the benefit of the people.

In regard to Somalia-‘Somaliland’ relations, we are encouraged that dialogue is ongoing at senior levels and that both sides have indicated a willingness to maintain communication and pursue further discussions.

In closing, I wish to reassure this Council that the UN in Somalia remains present, active, and committed to delivering our mandates – despite the restrictions and additional challenges inflicted by the global pandemic, as well as ongoing security threats to this mission.  We have temporarily reduced the staff working physically from Mogadishu and our field offices, but our colleagues telecommuting remotely remain working and engaged, wherever they are in the world, and continue to demonstrate their determination to support the people of Somalia.