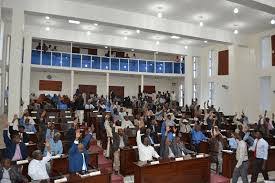 HARGEISA – The House of Elders, which is also known as Guurti, on Tuesday, has made changes to the administration of local governments and boundaries.

These changes affect all the 6 regions of Somaliland.

In the revised boundary of regions and local governments in Somaliland, the country will have 100 districts.

This was stipulated in a report tabled before the house of elders on Tuesday. A committee that was tasked with finding a solution to the menace took fourteen days to compile its report.

Local governments and municipalities which are rated under the categories A, B, C, D will have representations at the local government as follows.

The secretary of the House of Elders Abdinassir Adan Begsi who was reading the committee’s report stated that all bills and motions passed by the representatives at local governments must be presented to the minister for interior.

The secretary said this is to ensure the bill conforms with the mandate of the local councilors as stipulated in the constitution.

The committee also proposed that the mayor and his deputy can only be impeached with 2/3rd of the local council.