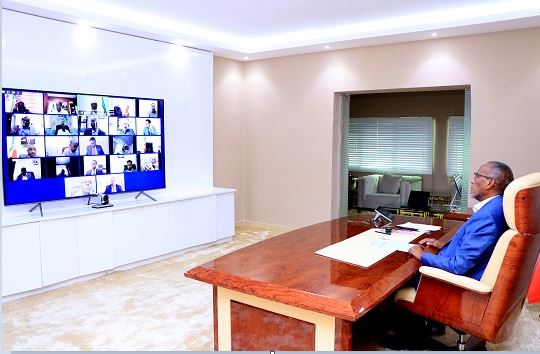 The Government has reiterated its steadfastness in seeing to it that peaceful stability, solidarity and harmonious setting within the populace is maintained.

It is also pledged its conviction of similarity seeing to it that the parliamentary and civic elections are held in time in a free and fair manner without unnecessary incidents.

The reiteration and conviction were contained in a four-point circular released by the Presidency following the council of cabinet meeting held at the end of last week.

The meeting, which was held virtually, had the Head of the State being flanked by his Deputy H.E. Abdirahman Abbdillahi Ismael through the tele-video-conference.

Of note was the fact that the cabinet upheld the need for peace and stability to prevail in the Sool areas that saw 19 lives lost in the prior week.

The ministers pointed out that not only should the security stability be enforced in the areas, but throughout the whole nation as supposed to be.

They prayed for the souls of those who departed through the skirmishes to rest in eternal peace.

Secondly, the cabinet reiterated the government’s conviction to hold the elections in a peaceful setting and that the state is readily steadfast in addressing unwarranted scenarios that may occur.

They urged the members of the public at large to be vigilant against any entity/entities that may be bent on breaching the peaceful order prevailing.

Thirdly, they pondered on the pandemic reaping across the world and noted the need of stepping up prophylactic measures.

Lastly, they noted the impacting political temperatures in the Horn of Africa with its diphasic trends hence pointed out the need to monitor them.

They agreed upon delving in a deep way hence palpate what the political fathom’s reverberations of the impact may portend.