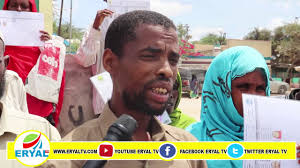 Some of the Ethiopian refugees living in Somaliland on Monday gathered outside the presidential palace in the capital Hargeisa and have staged peaceful protest to raise their complaints against the tough conditions and UNHRC’s corruption in terms of protection and services as well as resettlement cases. The refugees have leveled serious allegations against UNHCR officials particularly the UN agency’s office in Hargeisa alleging that they have corrupted their assistance. The protesters have said that they are living in a tough situation where they are in state of hunger. One protester said that due to lock-down measures amid Covid-19 in the country that they cannot go out in search of livelihood. He added that they have been in Somaliland for 12 years holding official recognition documents from UNHCR but has not received any assistance from it. He disclosed that their children are hungry and do not have what to eat. Female protester said that we do not want aid in the form of sanitizers but she added that she is hungry. UNHCR officials in Somaliland have ignored the plight of the refugees from Ethiopia, according to the protesters. They are calling the UNHCR to immediately provide assistance as they are in desperately need of food which they do not have what to feed to with and their children. The protesters have also demanded that UNHCR must accelerate their resettlement cases.