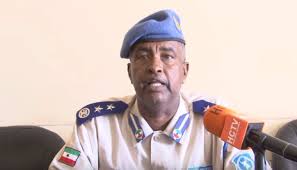 It rapidly spread in social media creating outrage against the police brutality.
Today the spokesman of SL police force Faisal Heiss announced the detention of police officers caught in tape beating elderly woman in Wajale town.
Heiss added that the officers were under investigation and will be brought to court.
“While the protests were going on, Somaliland police officers manhandled the woman who was participating in the protest. The police commissioner immediately ordered the arrest of the men who manhandled the woman. They were arrested and will be brought before a competent court to hear their case.” said Faisal
The victimized woman was participating in protest against the killing of a young man by policeman on Saturday December, 14.
The family of the killed man was not informed of his death and his body was not found for three days.
Local sources tell that when the body was discovered on Wednesday protest broke out in the city center. That is when the footage of the police brutalizing the woman was recorded.
Faisal Heiss is the police spokesman said the officers who killed the young man and had admitted to murder.
He added the police officer will be charged with murder and appear before the court soon.
“On 14th of December 2019, crime was committed in Wajale town. A police officer with full mental faculty had intentionally killed a citizen. The police was arrested the officer who committed the killing along with two officer accomplices. They have been transferred to Hargeisa central prison.” said Heiss
The police spokesman on behalf of the Police Boss praised the police in Wajale for dispersing the protesters.
Faisal Heiss said Wajale is a commercial city that could not afford protests to spread to the city.