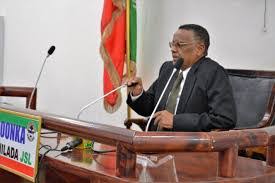 From now on the House of national assembly has stripped the impunity enjoyed by the local Councillors in Somaliland and can be arrested for breaking the rule of law in the state.

The House of Representatives also amended the law of regions and district boundaries whereby the council of elders upgraded Baligubadle, Taleh and Aynabo to category B. The House of national assembly invalidated the law approved by the house of elders whereby the above mentions districts have been demoted to category C. The MP’s have voted by show of hands during its parliament session presided over by the the house speaker. Mayors can be removed from office if half of the Councillors endorse with a majority vote. This was amended by the house of national assembly whereby it invalidated the suggestion made by the house of elders stating that mayors can be deposed of two thirds of the councilors endorse it. Council of elders have locked horns with the House of National Assembly and promised to take the matter to the court. This comes after the house of representatives amended the regional and district boundaries law. The Upper House of parliament is accusing the Lower House of parliament that it can invalidate a law by 55 votes. The Upper House of parliament passed the law by 50 PMs. The Council of Elders stated that there were 48 MPs while they invalidated the laws approved by them. Guurti threatened to write an official letter addressed to the higher court to put the wrangle within the legilative body in Somaliland to rest.