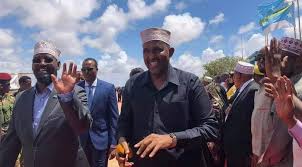 The Federal Government of Somalia has for the second time in a month banned direct flights to the southern city of Kismayo in a bid to restrict a Kenyan delegation from attending the inauguration of Jubbaland state president Ahmed Mohamed Islam alias Madobe.

The Somali Civil Aviation Authority has renewed its September directive on Friday ordering all flights from Kenya and any other point to stop over in Mogadishu before proceeding to Kismayo.

“All flights from anywhere in Kenya that go straight to Kismayo are banned. All domestic and international flights to Kismayo Airport must pass through Mogadishu,” a statement from the Somali Civil Aviation Authority said.

The directive follows a similar one in September ordering flights to the coastal city of Kismayo to pass by Mogadishu first. Somalia wrote to the International Civil Aviation Organisation (ICAO) last week protesting what it termed “airspace violation” by Kenya.

It subsequently summoned Kenyan ambassador to Somalia Gen Luca Tumbo on Thursday over the matter.