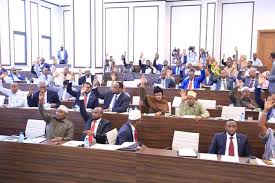 MOGADISHU–Of the 178 members, 171 voted in favor of the draft bill, five rejected it, while 2 abstained.

It is a major win for the current president Mohamed Abdilahi Farmajo. The bill was prepared after series of countrywide consulting meetings which involve engaging stakeholders on their preferred model for polls. Believed to have edited to meet certain references for the current administration, the law could spark another heated national debate among the stakeholders.
Greatly believed that aspires the law will allow President Farmajo to extend his stay in office past December 2020 under prevailing circumstances. For the Int’l Community the passing of the electoral law by the Lower House is one of the major victories in their consolidation efforts to restore democracy.
The draft law now has to be passed by the Upper House and signed by the president to become law.
The electoral guide voting in 2020 and 2021 polls while the law gives optimism to the Horn of Africa nation with regard to reverting to public voting. Analysts have warned against an extension of the current term of the leaders. At the center of contention is article 53 which has attracted wide condemnation from opposition groups in Somalia. Should it be impossible for polls to be held as stipulated the article stated. the term of the parliament and the president should be extended until elections are done.
Although it is much unlikely that the bill will be rejected in the Upper House, the opposition team is already crying foul calling for the immediate amendment.
They have called for the removal of the article sating they view as a persecution for an extension by the current government under Farmajo.
The article allows a delay of elections if serious events arise like natural disasters, diseases, droughts and technical problems, the bill states. Also said to create controversy in the electoral bill is the adaption of one man one vote model which is said to replace the clan based system. The int’l community has endorsed the winner takes all model despite lack of adequate preparations according to the critics.
Somalia stability will be largely defined by the 2020 polls as the commitment by the international community. There have been a shuttling diplomatic meetings to engage both sides of the political divide.
Since taking over in 2017 Farmajo has failed to contain the Opposition besides facing threats from Al shabab.