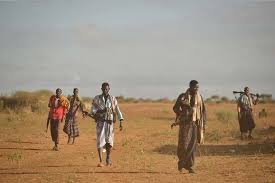 The raid transpired after local militias conducted an operation and attacked Al Shabab bases in the area.

A spokesman for Macawislay told that they killed at least 10 Al Shabab members  and wounded many more.

The deadly Al shabab group has not issued a statement on the skirmishes and reports confirm that the area is stable as far as the situation is concerned.

The local militia fighters dubbed Macawislay independently carry out operations and attacks against Al Shabab for the last two years in the region in an attempt to protect their lives and livestock from Al shabab militants.