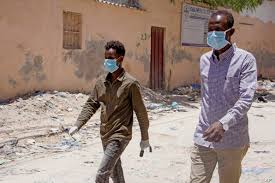 Somalia and Djibouti’s covid-19 cases could become the new worry for regional neighbours already fighting their local battles against the scary virus disease.

As at Wednesday, Djibouti had reported 1,120 cases as Somalia filed 835 incidences of infections.

Both countries have a common language and common cultural practices with neighbours Kenya and Ethiopia.

But a rise in their cases was directly affecting neighbours.

On Wednesday, Ethiopia reported 17 new cases of the virus disease.

Dr Lia Tadesse, the Ethiopian Health Minister indicated that 13 of those had recently returned to Ethiopia, illegally, from Djibouti and Somalia; reflecting the porous borders between the countries.

Four other people were residents of Addis Ababa with no travel history, indicating a community spread something officials had dreaded weeks ago.

Ethiopia now has 162 total cases with four deaths and 93 recoveries.

Last week, officials intercepted 300 Ethiopian nationals who had attempted to cross back into the country from Djibouti.

In Somalia, authorities have been baffled by the rise in cases in a country that only two weeks ago had 26 reported number of people confirmed to have contracted Covid-19.

On Tuesday night, Somalia’s Health Minister Fawziya Abukar indicated the cases had in fact come from across the country.

In her situational update, she told journalists that Benadir (the metropolis of Mogadishu), Jubbaland in the Southe-western region, South West state and Puntland had all reported new cases.

It meant that the 835 cases were mostly in Mogadishu, but also in its five federal states, as well as the autonomous region of Somaliland.

In an interview with The EastAfrican last week, Somalia’s Finance Minister Abdirahman Beileh admitted the cases had shot up faster than anticipated, and said the country had to think about economic shields required to avoid a relapse into pre-war status.

“Our plans are to firstly prioritise the health and wellbeing of the Somali people who are starting to contract the virus at a quicker rate than first expected,” he said referring to providing public information “on how to keep safe, continuing with social distancing measures and providing tax relief on essential stable food to offset the cost of the basic foods rising at this vulnerable time.”

“We are also working on costing the economic impact of the corona pandemic in Somalia and preparing the ground work for an anticipated budget support program to cover some of the budget deficit for this year.”

But Somalia’s own problems aren’t just about information, but cultural. Though the government imposed a dusk-dawn curfew in the capital and banned public gatherings, officials were struggling to implement it. Some folks have insisted to going to mosques, pledging social distancing, but breaking the very rule by using the same door and washrooms.

The result was public protests where those very rules may have been broken again.

Dr Abukar said on Tuesday Somalia had lost 38 people to Covid-19. But Somalia is predominantly Muslim where burials are almost immediate.

Officials admit they have not tested cause of death on everyone, especially in places far off the capital.

However, Mohamed Abdi Hayir, the Somali Information Minister last week indicated all of the recent deaths in the capital were a result of Covid-19, although he didn’t clarify whether any of those people had underlying health conditions.

Somalia’s porous border with Kenya was directly affecting its neighbour.

Officials in Wajir reported on Tuesday they had forced three people from Somalia into quarantine after they crossed back illegally.

Somalia, Ethiopia, Djibouti and Kenya have all closed their land borders except for cargo movements. They all belong to regional bloc Intergovernmental Authority on Development (Igad) which last month decreed a common strategy to fight the covid-19 pandemic.

Meanwhile, in Tanzania; authorities do not normally announce a daily update on new infections. Officially, Tanzania has 480 cases of whom 16 have died.

Tanzanian President has also not locked down the country to tame the spread beyond hotspots.