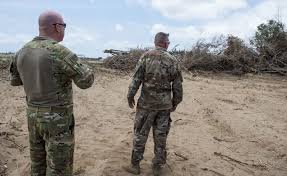 Al Shabab, the Somali terrorist group, on Sunday attacked a military base in Kenya that is used by both American and Kenyan forces, according to U.S. Africa Command.

“U.S. Africa Command acknowledges there was an attack at Manda Bay Airfield, Kenya and is monitoring the situation,” said a spokesperson for U.S. Africa Command in a statement provided to ABC News. “As facts and details emerge, we will provide an update.”

The official did not provide information about any potential casualties at the Kenyan military base that has housed U.S. military personnel for years. It is unclear how many American personnel are stationed at the base that has reportedly been a site for U.S. special operations forces operating in Somalia.

In a statement, Kenya’s Defense Forces (KDF) said there had been an attempt to breach security at Manda Airstrip — which is near the Camp Simba US base — but it had been “successfully repulsed.”

“Four terrorists’ bodies have so far been found,” the KDF said in the statement. “The airstrip is safe.”

On Sunday, al Qaeda affiliate al-Shabaab claimed responsibility for an attack on Camp Simba, in Lamu county, near Kenya’s border with Somalia.

C-146A Wolfhound is a tactical transport aircraft designed and manufactured by Fairchild Dornier, for the US Air Force (USAF). The aircraft provides flexible, responsive and operational transportation of the US Special Operations Command (USSOCOM) personnel in the theatre.

The aircraft is also used to conduct non-standard aviation (NSAv) missions to assist Joint Special Operations Command of the USSOCOM.

As to the Dash-8, this is a specially modified aircraft, equipped with synthetic aperture radar capable of creating images across an area nearly two miles wide depending on the aircraft’s altitude. It also had a sensor turret with electro-optical and infrared cameras.

A Kenyan police reported cited by the Associated Press also said that two airplanes, one Kenyan and one American, along with two U.S. helicopters and other vehicles, were destroyed in the attack.

In its statement on Sunday’s attack, al-Shabab said it had inflicted “severe casualties” on both American and Kenyan forces and confirmed it had destroyed U.S. aircraft and vehicles.

Somali Islamist militants said they destroyed seven aircraft and three vehicles on Sunday in an attack on a military base in Kenya’s Lamu county used by both U.S. and Kenyan troops, although their account could not be independently verified.