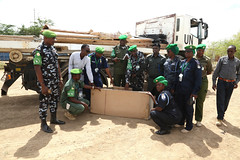 Jowhar, 5 January 2020 – The African Union Mission in Somalia (AMISOM) on Saturday handed over an assortment of office equipment to enhance the operational efficiency of the HirShabelle State Police Force.

The furniture handed over in Jowhar, will be distributed to the various police stations in Hiraan and Middle Shabelle regions.

AMISOM police coordinating officer for HirShabelle State, Assistant Commissioner of Police Yuyi Mwala, handed over the equipment and expressed hope that the furniture would help to address needs in the various police stations in the state.

“What we have handed over will be distributed to various police stations such as Adale police station, Bal’ad police station and Warsheikh. We have informed the police commissioner on how the furniture is supposed to be used and it is our considered view that it is going to be used appropriately,” Mwala said.

Mwala stressed the importance of collaboration between AMISOM and Somali Police Force and hailed the excellent working relationship between the HirShabelle State Police and AMISOM.

“HirShabelle Police Force is a partner in achieving our mandate. We cannot achieve our mandate as AMISOM if we don’t work with the Somali Police,” Mwala added.

The HirShabelle State Police Commissioner, Hassan Di’sow Hassan, thanked AMISOM for the support rendered and further said that some of the equipment would be delivered to Bula Burde and Beletweyne police stations in Hiraan region.

“I appreciate AMISOM for the furniture we have received and express our readiness to work jointly and strengthen our already excellent working relationship,” said the HirShabelle State Police Commissioner, Hassan.